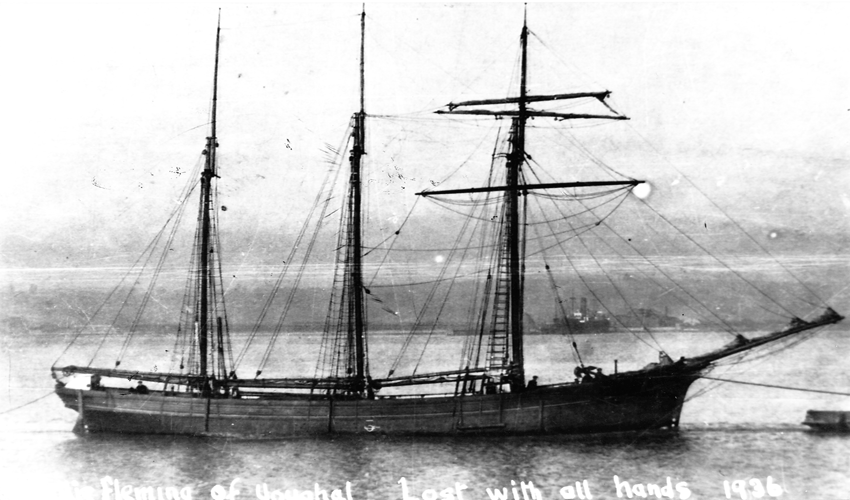 The Fleming family of Youghal were general merchants, and Martin J Fleming had several ships involved in the coal trade between Bristol Channel ports and the home port of Youghal. One of these vessels was the three-masted schooner, the Nellie Fleming, called after his daughter. A sister ship the Kathleen & May was called after the other two daughters in the family, and this vessel was preserved by the Maritime Trust and is now open to the public in London.

In mid-December 1913, the Nellie Fleming was on one of her usual trips carrying a cargo of about 250 tons of coal and bound for Youghal. The night was fine with a light easterly breeze but it was very dark with a thick haze prevailing. The ship and her crew sailed along the south coast is very close to the shore and as a result, they missed the Light of Mine Head owing to the intervening cliffs. Thinking they had cleared Ardmore Head and seeing the lights in the village they altered course and steered the ship into the bay.

At about 8.20 pm., sometime before high water the Nellie Fleming went aground on the Black Rock off Curragh in Ardmore Bay on the night of Thursday 18th December in 1913. It was quite close to the spot where the ill-fated Teaser struck the rocks two years earlier In 1911 but further inshore.

Some Curragh fishermen rowed out and on getting alongside, the skipper and crew were taken aback somewhat to discover their location. No signal of distress was given and the crew stayed onboard the vessel hoping to get her off later. The fishermen reported to the Ardmore Coastguards. Mr. Bates Chief Officer alerted Youghal and Helvick and the lifeboats from both places put to sea and made for Ardmore to stand by in case of need. The Ardmore rocket crew went to the scene also and at about 10.30 pm a rocket was fired over the vessel. The crew didn’t haul the line, however, fearing salvage no doubt. Around midnight Captain Donovan of Youghal and the crew found the water gaining on them had reached the cabin floor and so they used their own boat to come safely ashore at the pier. They later went to Youghal aboard the lifeboat. If the weather had been bad it could have been quite a different story with lives lost.

On Friday morning the owner of the vessel Martin J Fleming came over to Ardmore from Youghal with a gang of men, hoping if possible to lighten the vessel and get her off. Onboarding her however they found the water right up to the deck due to the badly holed bottom. The wind was rising and the sea getting rough, she was obviously going to be a total wreck. Martin Fleming handed her over to Lloyd’s agent Mr. Farrell of Youghal.

What happened next was related by Johnny Larkin and Jack Crowley and recorded in the Ardmore Journal.