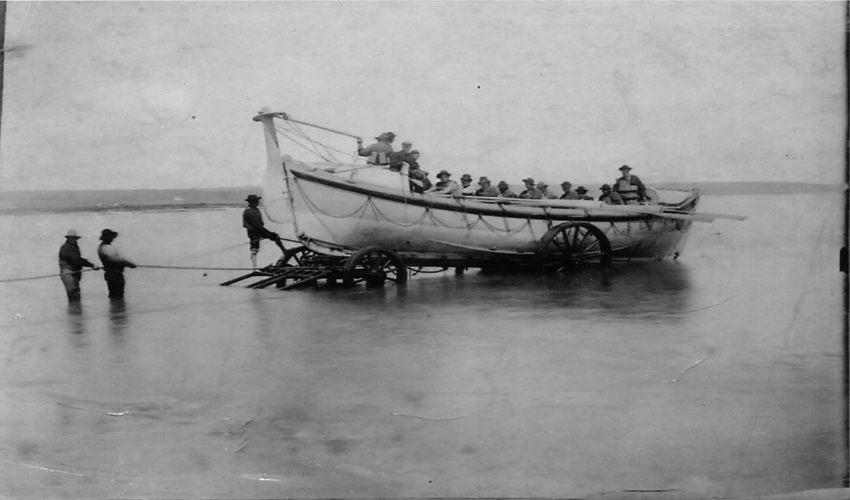 Step into history and read all about the famous Rocket Crew of Ardmore.

Meet the men that risked their own lives to save others

George William Manby (1765-1854) was born in Norfolk. He was a school friend of Horatio Nelson and became an English army officer. Manby wrote numerous works on subjects as diverse as lifeboat design and criminal law. He invented the first portable fire extinguisher and the ‘jumping sheet’ for catching persons when jumping from burning buildings.

Manby was a tireless experimenter. On witnessing a shipwreck off Yarmouth in which the crew perished within sixty yards of the shore he turned his attention to life-saving apparatus.  The first thing was to establish a communication with the shore. This he did by firing a rope to the ship from a mortar on the shore. The line-throwing apparatus which he invented was first used successfully at a shipwreck in 1808 and thereafter its use rapidly became widespread.  In 1878 the mortars were superseded by rope-carrying rockets.

It is hard to believe that some sailors could be completely ignorant of the Manby line-throwing apparatus more than fifty years after its invention. Yet such was the situation with the unfortunate crew of the Sextusa, a Maltese barque of 400 tons when she was’ wrecked in Ardmore Bay on Sunday 30 January 1865. Onboard was a cargo of Indian corn consigned to Cobh.  The Coastguards under Thomas Coveney got a line on board at the first attempt. The crew of the Sextusa didn’t know how to use it, resulting in the loss of six lives. Ten others were nevertheless rescued.

The traditional method of rescue is as follows: The rocket carrying the line is fired over the vessel in distress. Once contact is made, the ship’s crew can haul away Until a stouter line is on board.  Attached will be a tally board in several languages instructing the crew to fasten the rope to the ship’s mast or other suitable fixture. The breeches buoy ‘can now be set up and hauled out to the wreck to bring the crew ashore one by one. A tripod or ‘triangle’ is used to keep the breeches buoy clear of breakers and rocks.

With the establishment of the Irish Free State in 1922, the British coastguard service ceased. Tom Casement, sea-faring brother of Sir Roger the executed patriot, tried in vain to form a new Irish coastguard. His efforts did, however, result in the setting up of the Coast Life Saving Service (CLSS) at the end of 1923. The Service was headed by a Marine Surveyor with the title of Inspector of the Coast Life Saving Service. Tom Casement was the first Inspector. About fifty coast life-saving stations were initially set up around the Irish coast. Ardmore Head was No. 23. To the east lay No. 22 (Helvick Head), and to the west No. 24 (Youghal). 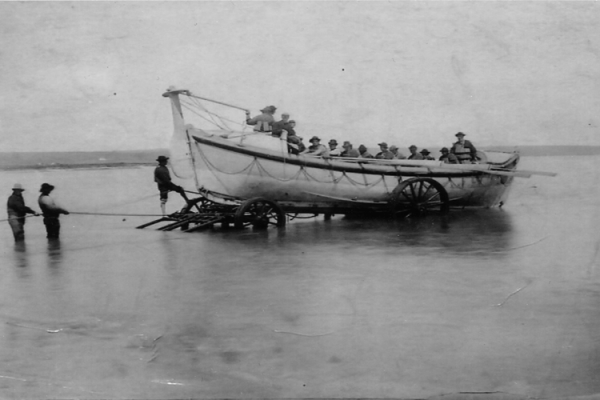 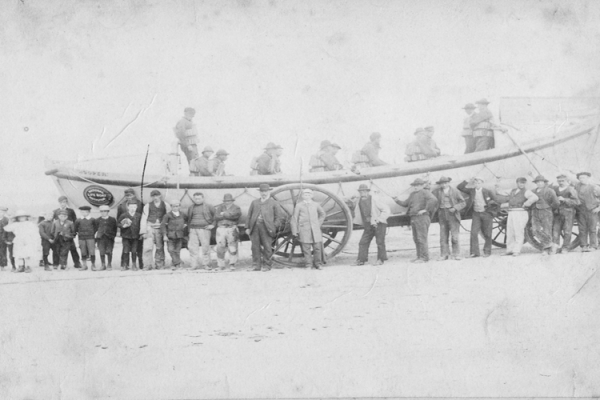 According to the CLSS records the Ardmore Station was reestablished on the 20th February 1924. The station building or Rocket House was built by the Coastguards and adjoins the Coastguard Station In the townland of Dysert. The CLSS inherited this building together with the rocket cart and lifesaving equipment. Many of the rocket crew down the years were descendants of the old volunteer crew under the command of the Coastguards. Under the Inspector’s direction, the stations on the south coast (from Kilmore Quay to Valentia) are supervised and exercised by a Superintendent based in Cork. The first Superintendent was Mr. J. Morgan. He came down from Cork and formed a crew, appointing Jamsie Quain as No. 1 Man. Mr. Morgan remained as Superintendent right up to 1945. He was succeeded by Mr. Hamilton (1946-48), Mr. J. F. Ga1gey (1948-52), Captain William Jeffers, (1953-79), and the present man Captain David Sheil.

I remember as a youngster going over to Whiting Bay in August to see the crew firing the rocket out to the Island. They used the old rocket cart then and I remember seeing Johnny Brien of Main Street, Jack’s father, sitting up on the cart with two horses pulling it. Jamsie Quain was No 1. man then. Paddy Grady, (Fitzgerald) who lived at the bottom of Coffey Lane, took over as No. 2 after Johnny and when Jamsie Quain died in January 1936 Paddy took over as No. 1 Man (1936-1949). At that time they were using the old rocket. You put a light on it and it smoked for a while before firing off. Paddy was always a bit nervous about firing it.  The Superintendent, Captain Morgan, was very nice and a real seaman. I remember him well – a low sized stout man with his brown suit, hat, and stick.

The rocket cart went out of use around the time of, the last War and Martin Hurley used to bring the gear on the lorry.  Martin was always up to tricks and the two stories below are typical.

The Superintendent came down from Cork for the rocket crew exercises to train and examine the men. On one occasion he asked a nervous volunteer “What colour light would be shown by a ship in distress?” Prompted by Martin the man replied “A Black Light, Sir!” Someone else was asked what type of vessel would show certain lights “A Steam Roller” replied the prompted volunteer.

In 1950 James F. Quain took over as No.1 with Johnny Power as No. 2. They were the longest-serving pair, and ran the station together for over twenty-five years until they retired. I joined the rocket crew in the early 1950s – Johnny McGrath was always on to me to join. Tommy Hallahan was on signals then – flags and morse. I was No. 8 and used to wear a life jacket and help the fellows out of the breeches buoy. After each exercise crew members were paid 5/- (25 new pence). Bill Power’s two sons Johnny (No. 2) and Paddy (No. 5) were in it in my time.  Other families were also well represented in the rocket:  Maurice Flynn of Chapel Row was succeeded by his son Paddy, Eddie Fitzgerald of Ardo by his son Mick and Declan Mulcahy of Lr. Curragh by his son Mick. I remember one day overhearing Captain Morgan saying ‘Declan Mulcahy, you’re the live wire of the Rocket’. The crew list in my time was as follows:

The one thing that happened in my time was the loss of the French trawler ‘Fee des Ondes’ on Sunday 27 October 1963.  I well remember the morning, Jim Quain sending up a maroon signal at the Station to call out the crew and then firing the rocket over the vessel. I think the last time the rocket had been fired over a ship was in January 1913 during the time of the Coastguards, when another French boat, the Marechal de Noailles was wrecked near Mine Head.

My uncle, Jack Brien was in the rocket crew and was anxious for me to Join. His father Johnny Brien had been involved in the Teaser rescue in 1911 and the Marechal de Noailles in 1913. When the rocket crew was reformed in the 1920s Johnny became No. 2. I took over as No. 1 Man in 1977 when Jim Quain retired. At that time it was a team of elderly men with old equipment and the big rocket was still used. You could aim very accurately by 1ining up the rocket launching frame and allowing for the wind. The big change in my time was the introduction of the handheld rocket, fired from the hip. There were two shipwrecks here during my time as No. 1 Man.

1984: On Friday 13 January a French trawler ‘Anne Sophie’ went aground on the rocks at Ballymacart. The crew were rescued off her by RAF helicopter before anyone even knew the vessel had gone ashore.

1987: On Saturday 12 December the crane barge ‘Samson” ran aground at Ram Head after a tow rope snapped. One of the rocket crew volunteers, Jim Rooney, spent Christmas onboard claiming salvage, so it was in the news for quite a while.

In both cases, the Marine Rescue Coordination Centre (MRCC) at Shannon asked the rocket crew to investigate, locate the wreck and put a watch on the vessel.

I was already involved in the Fire Service and found that the commitment was too much so I came out of CLSS in 1988.

As youngsters, we used to go and see the practice on the Island. From seeing the men and your own father you got the ambition to do the same.  It seems to go in families. My father, Pierie Foley of Monea was related to the Smyths of Ardo, two brothers of whom were in the rocket crew together. I joined in my father’s time (1978) as I felt I should keep on the tradition. There is a sense of adventure about a call-out but I also feel I owe it to those who’ve gone before me. A lot of the crew were fishermen like my father and they’d see the need for a rescue service.  I would like to see the old rocket cart displayed here to preserve the memory of all those people and the many shipwrecks In the area. There is a lot of history in this small parish and we should be proud of it.

I took over as No. 2 Man from Johnny Power in 1981 “You will act as second-in-command of the volunteer company and also as assistant caretaker of the station” was what the letter said. Everything has changed now of course and one ot the things that went was the ‘Heaving Cane.’ This was 19 inches long and loaded at one end with 1.75 lbs of lead throwing a line to a vessel close inshore. It was intended for hand exercise there was a competition in throwing th heavy cane. It had to be thrown overhand with some coiled line as if one were waist-deep in water. There was a great rivalry between my father and Paddy Power – two big men. The winner couldn’t throw in the next competition so they used to win every second turn. I don’t know if they were ever really tested against each other.

Ours is the oldest organization in the Parish. We’re there since the foundation of the State, and long before if you include the old Coastguard rocket crew. I joined In 1978 and took over from Jackie Burke as No. 1 Man In March 1988. In 1989 the name was changed from Coast Life Saving Service (CLSS) to Coast and Cliff Rescue Service (CCRS). The Superintendent is now called the Regional Officer. I am the Area Officer and Paddy Foley is the Deputy Area Officer. The crew are still called the Volunteers but are no longer allocated numbers. The old crew of fifteen has now been reduced to eleven, although we have only ten at present. The modern gear is very lightweight and we use VHF radios. Rescues nowadays are controlled by MRCC at Shannon, directing the activities of the various coastal rescue services – CCRS, the lifeboat, and the helicopter – by radio. Joint exercises are often carried out.  If a member of the public sees someone in trouble at sea now, just telephone 999 and ask for Marine Rescue.

The Rocket Crew is exercised once a quarter. Traditionally the August exercise attracts many sightseers to Goat Island – the ideal practice area.  The rocket post on the island acts as a mock ship’s mast and ‘casualties’ are brought over in the breeches buoy.

Acknowledgment: A very sincere thank you is extended to Agnes Walsh, Catherine Hickey, and Captain David Sheil, all of the Dept. of the Marine (CCRS), for their assistance in compiling this article.