No trip to Ardmore is complete without exploring the stories of the wrecks that litter it’s coastline.

And, one of the most vivid accounts is that of the loss of the Schooner Teaser.

Not just because of the sad tale of the loss of life on that fateful night. But, also for how this event changed the lives of local men who were propelled into the realm of heroes.

Discover the events as they unfolded on that night.

On Saturday morning, March 18th, 1911, the schooner “Teaser” of  Montrose, was wrecked at Curragh, Ardmore with the loss of all hands, during a terrible storm. 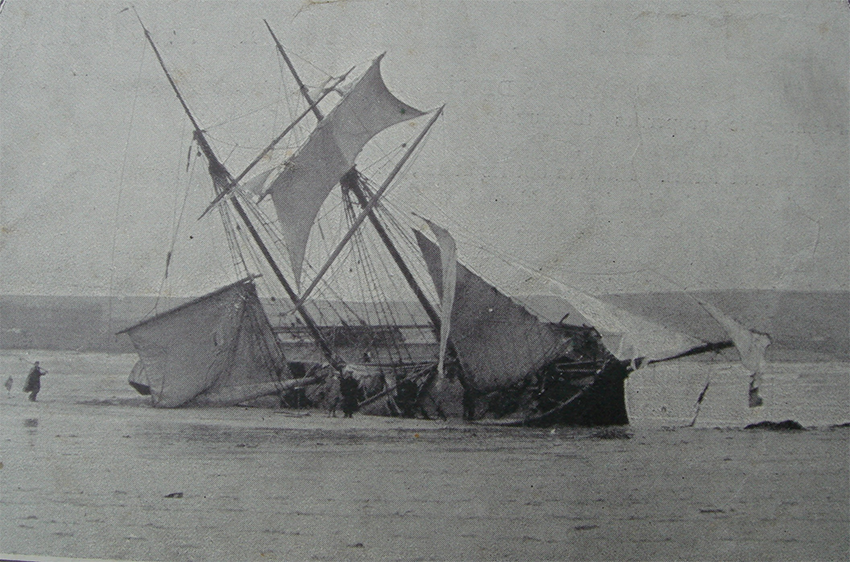 The “Teaser” was a small schooner on a voyage from Swansea and was bound for Killorglin, Dingle Bay. She was owned by a Mr. Ferguson of Connach’s Quay, Flintshire, North Wales, She called at Milford Haven, which is supposed to have left on Thursday, when her Captain, Thomas Hughes, set sail on his last tragic voyage to eternity. When the vessel was sighted off Ardmore in a distressed condition, the coastguards with rocket apparatus hurried to the rescue. Several rockets were fired some of which reached the ship. Three of the drew were observed in the rigging in a pitiful condition, but they were unable to make use of the lines put aboard by the coastguards. Two coastguards, Richard Barry and Alexander Neal, plunged into the icy cold water with mountainous waves breaking over them in a gallant attempt to reach the crew but had to be pulled from the water in an exhausted condition. Rev. John O’Shea, Curate of Ardmore, was promptly on the scene. Seeing that the only hope of rescue could be carried out by boat, Fr. O’Shea, , accompanied by a crowd of willing hands, procured a boat nearly a mile away from the wreck. It was drawn by horse through old boreens with all possible speed to the scene. Fr. O’Shea put on a lifebelt and called to the crowd for a crew. The men of Ardmore answered the call without hesitation, knowing that to get into an open boat in such appalling weather would have daunted the bravest man. But these men had answered many a call and this was to be no exception. Coastguards Barry and Neal, Constable Lawton, William Harris Hotelkeeper, Patrick Power Farmer, John O’Brien boatman, and Cornelius O’Brien Farmer, formed a crew and with all possible safeguards they pulled the boat into the foaming surf. In the teeth of a raging gale and with the seas breaking over, they pulled out from the shore. Through mountainous waves, they rowed until they came alongside the “Teaser”. The crew of the stricken vessel had lashed themselves to the rigging and were at death’s door when Fr. O’Shea administered the last sacraments to them. In an effort to get them off the rigging, one of them slipped into the sea. Coastguards Barry and Neal jumped from the rigging into the sea and with the aid of Mr. Harris and Constable Lawton, succeeded in getting him back on board._Coastguard Barry was now exhausted, he collapsed, and Fr. O’Shea had to administer the Sacraments to him also. Unfortunately, the gallant and heroic efforts of the men of Ardmore failed as all of the crew of the “Teaser” died before they could get them ashore. Dr. Foley and many willing hands did all that was humanly possible for the crew but without avail. 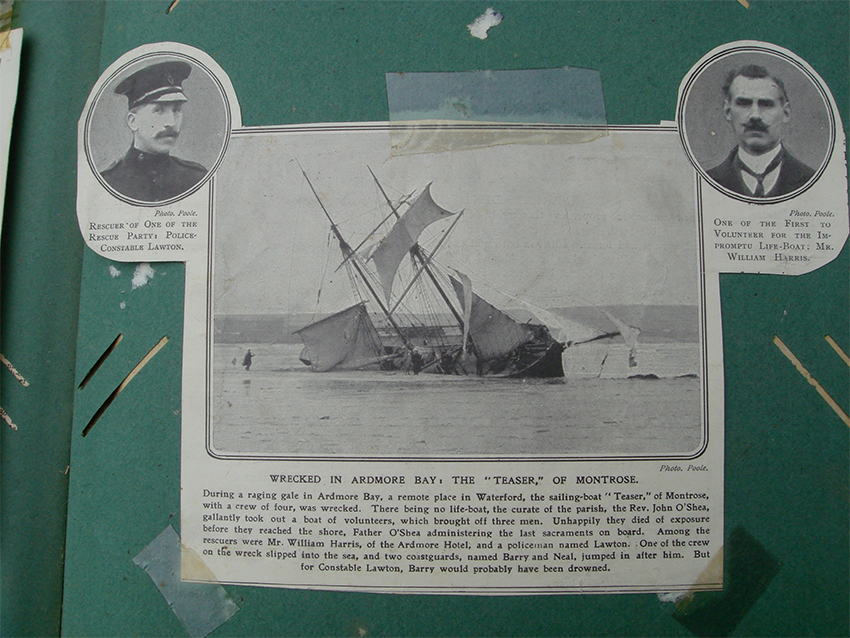 Fr. O’Shea and his crew were so exhausted that they had to be assisted to a neighbouring house. They fortunately recovered from their ordeal. Coastguard Barry was driven to the Coastguard station and quickly recovered his strength.

The following are the names of the crew of the “Teaser”, Captain Thomas Hughes, the Mate Fox, and Ordinary Seaman Walsh.

For this rescue, the brave men of Ardmore were decorated by H.M. the King of England at Buckingham Palace, on May 2nd, 1911. They also received medals and certificates from the Royal National Lifeboat Institution. These were presented by the Lord Lieutenant and Lady Aberdeen at the Ui Breasail exhibition.

Fr. O’Shea received the George Cross from H.M. the King.

In the years that followed those involved came to be known as the Heroes of the Teaser. We have collected a number of other images that capture this moment in the heritage of Ardmore. 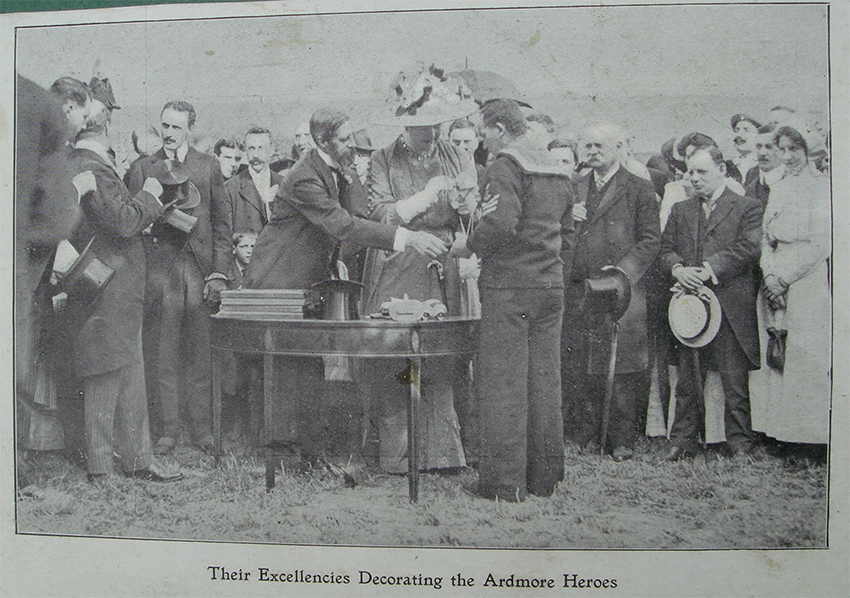 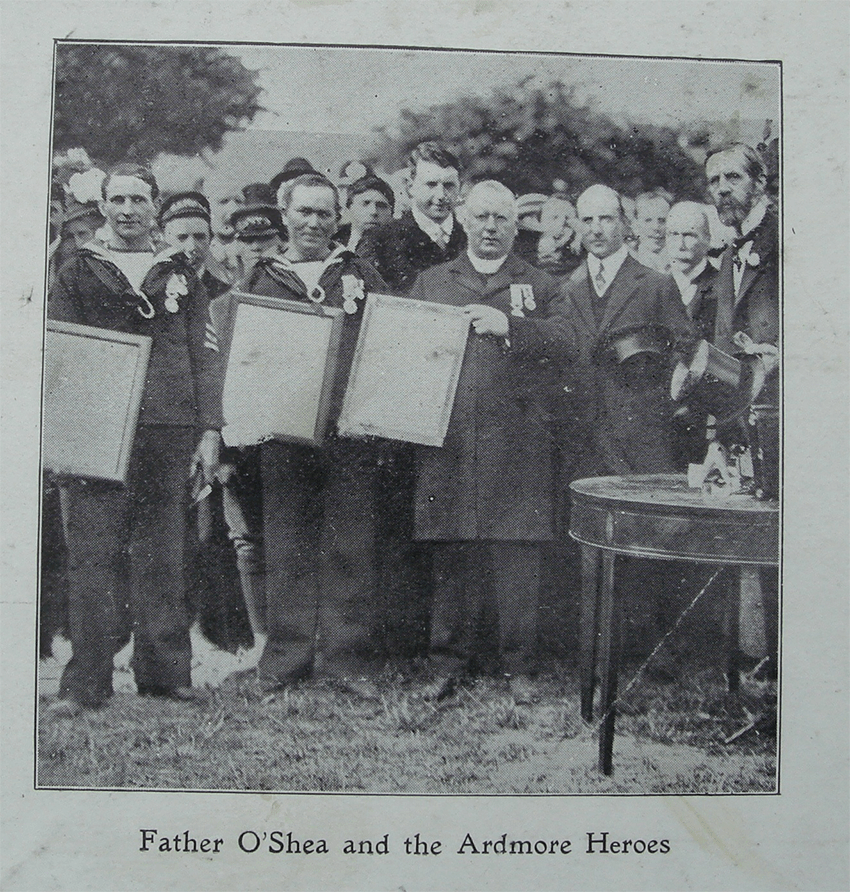 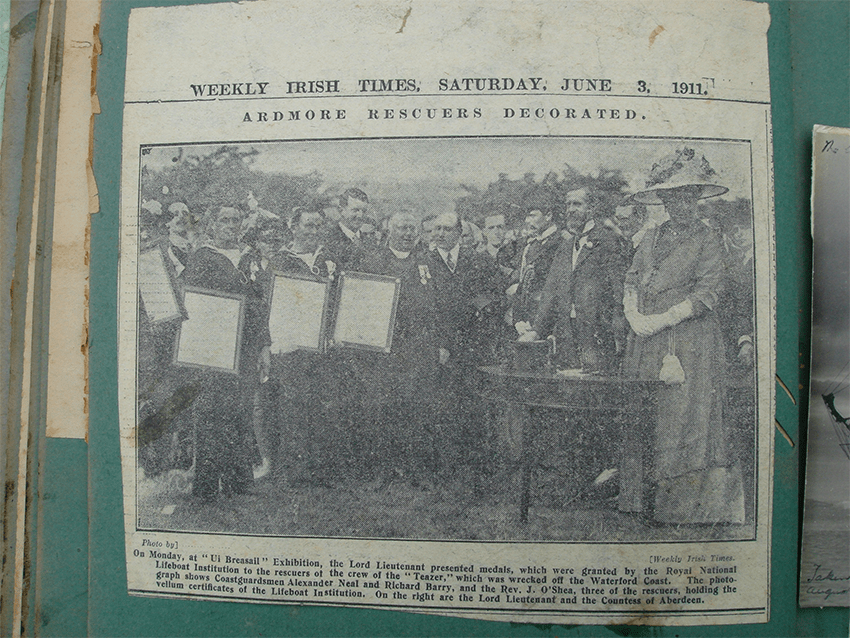 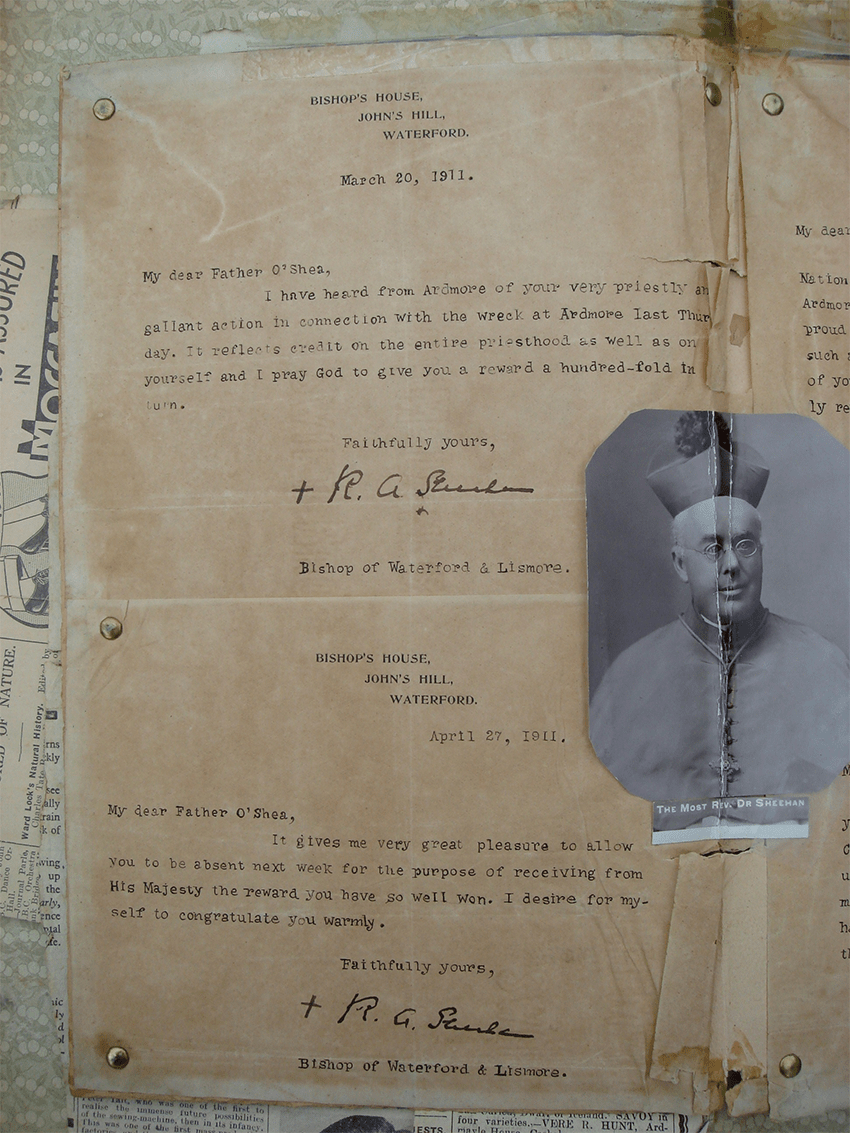 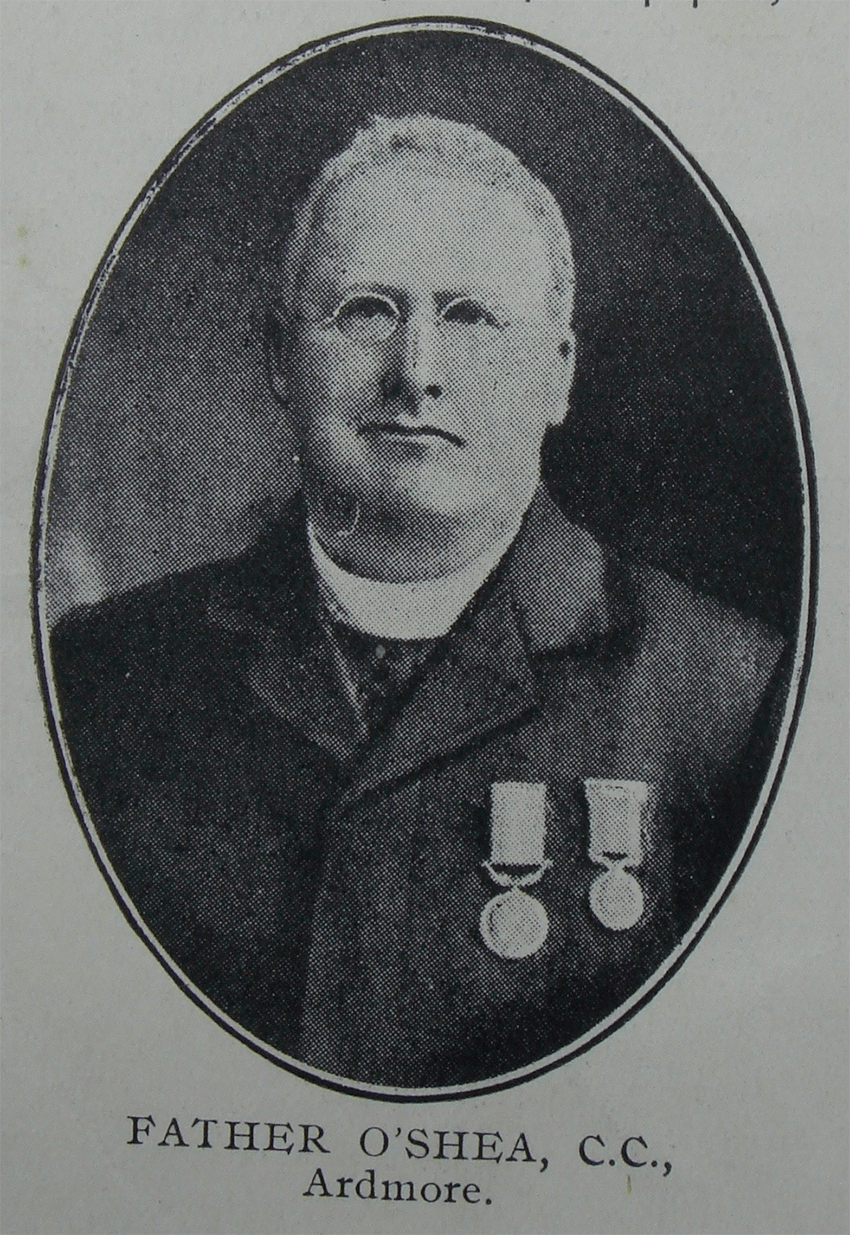 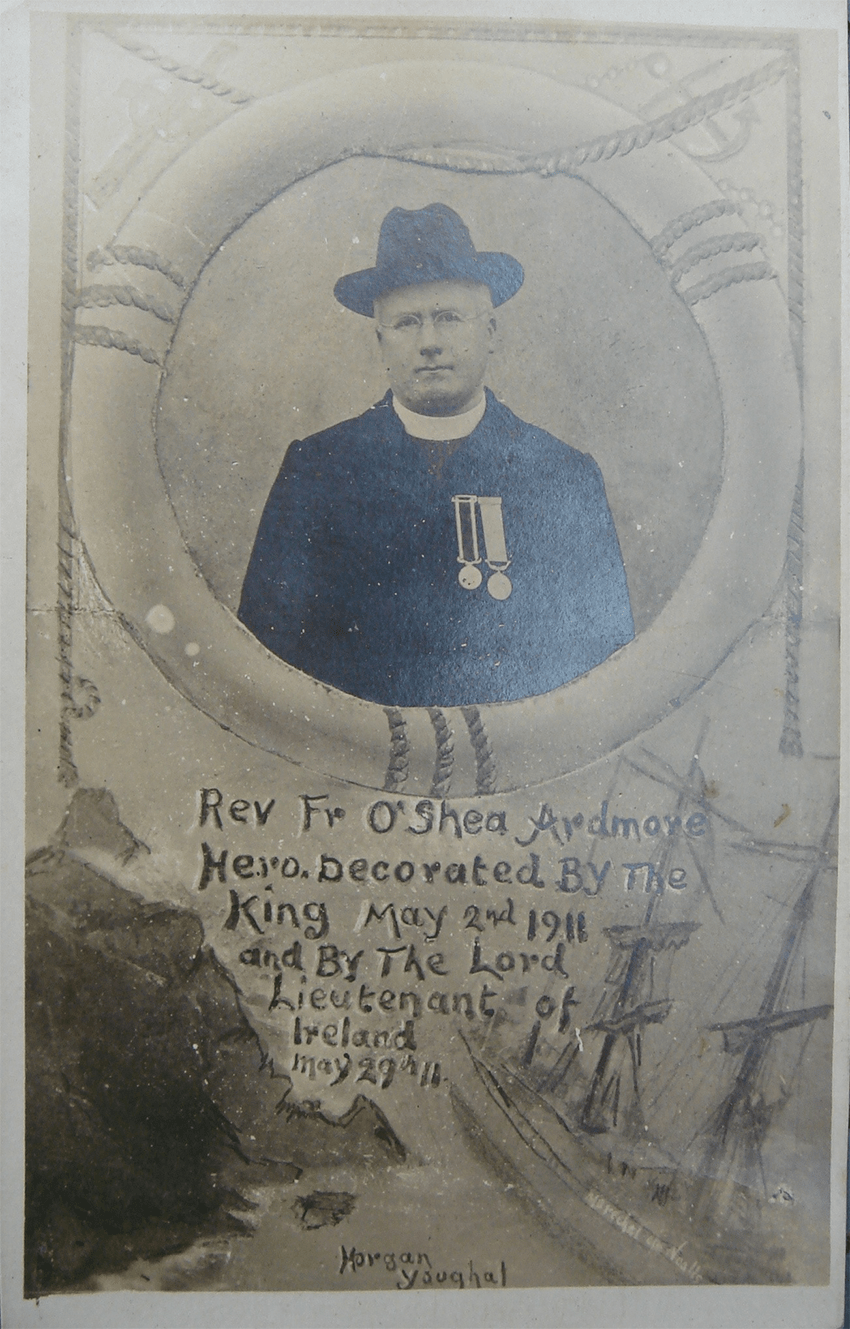 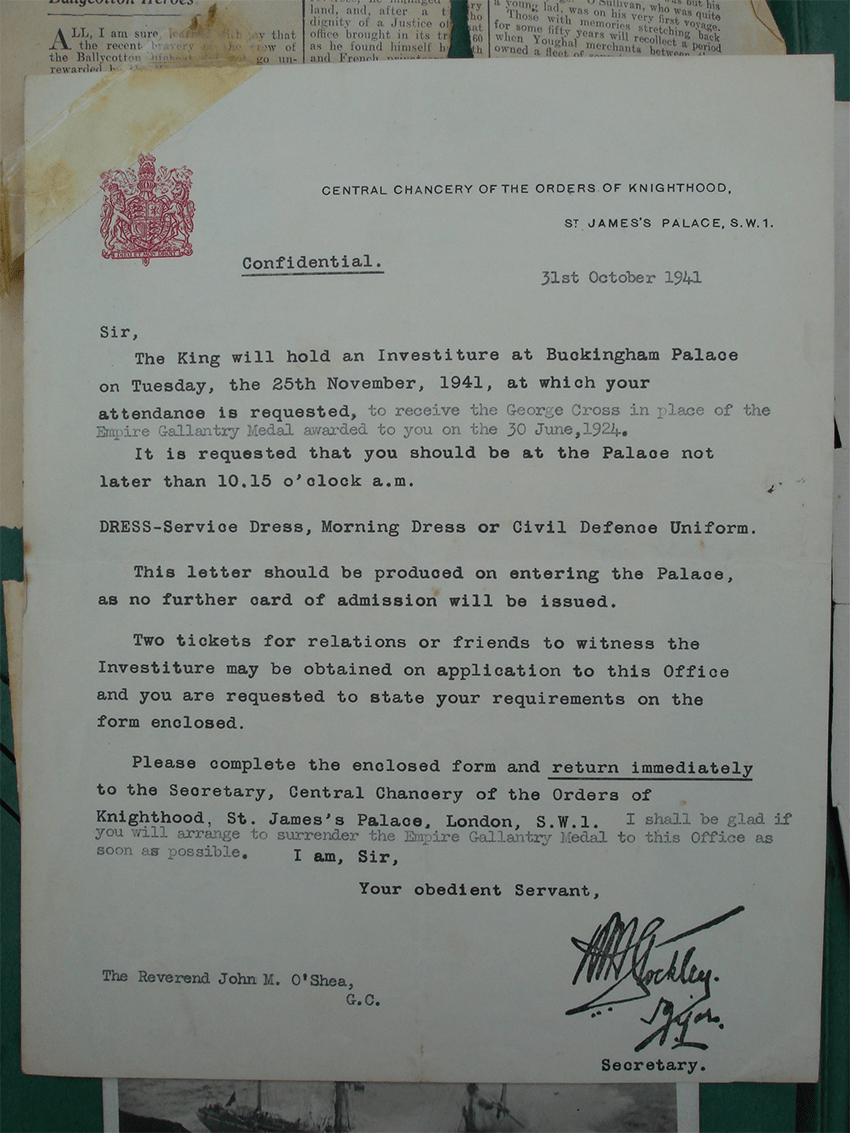 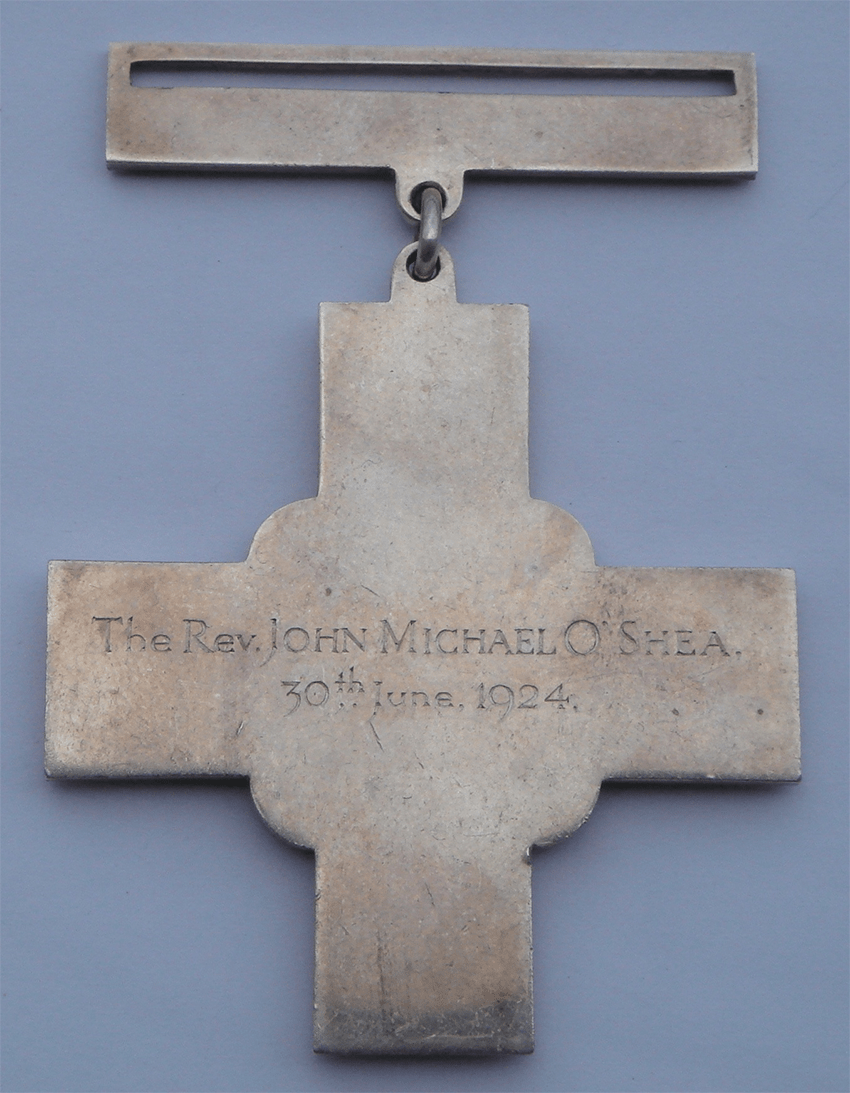 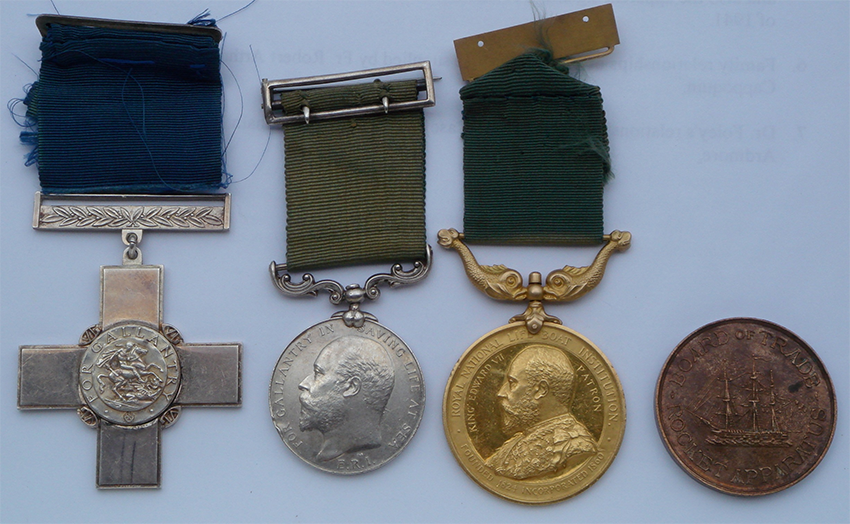 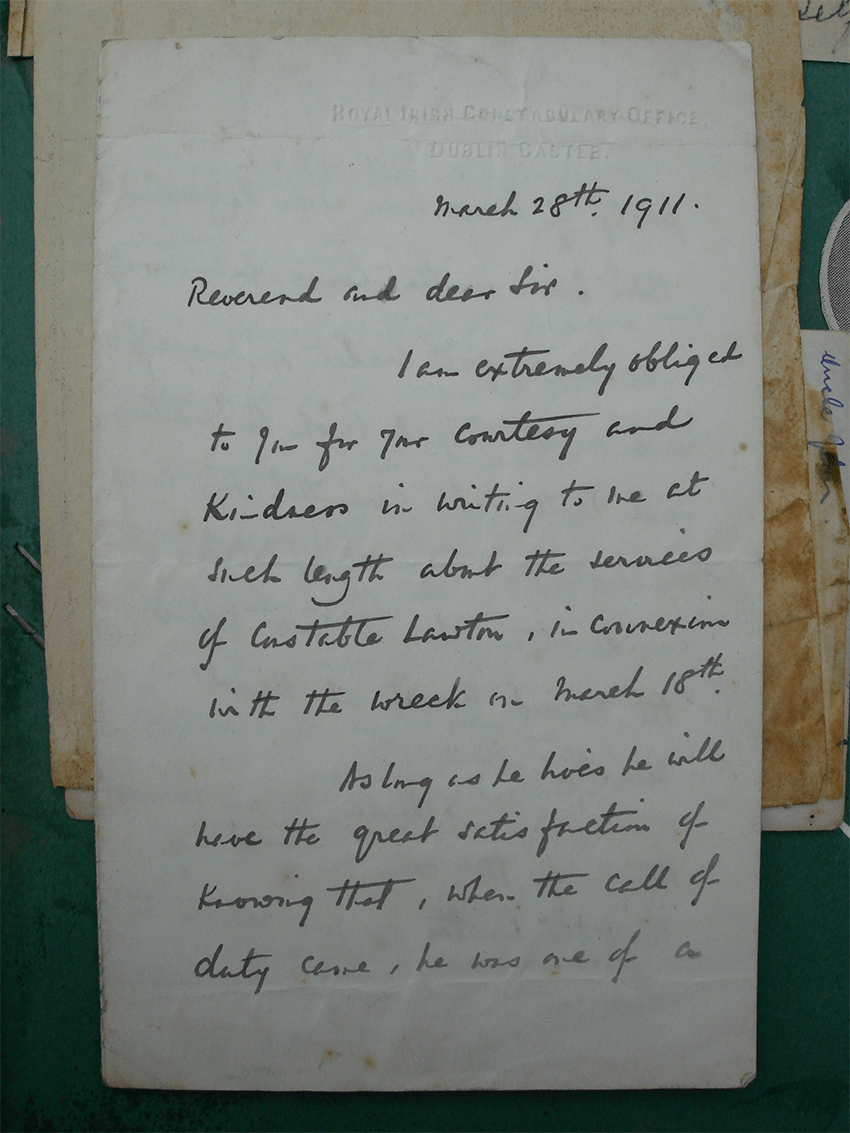 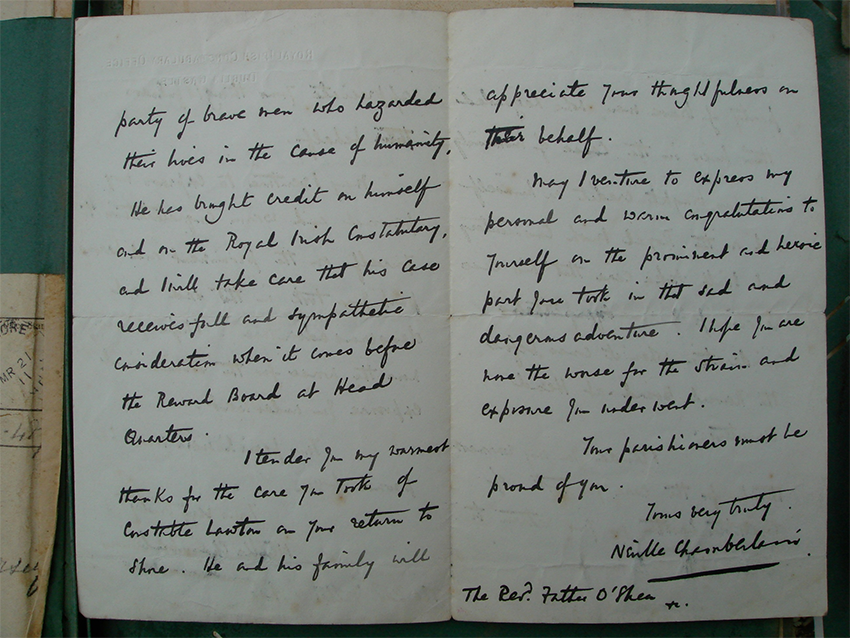 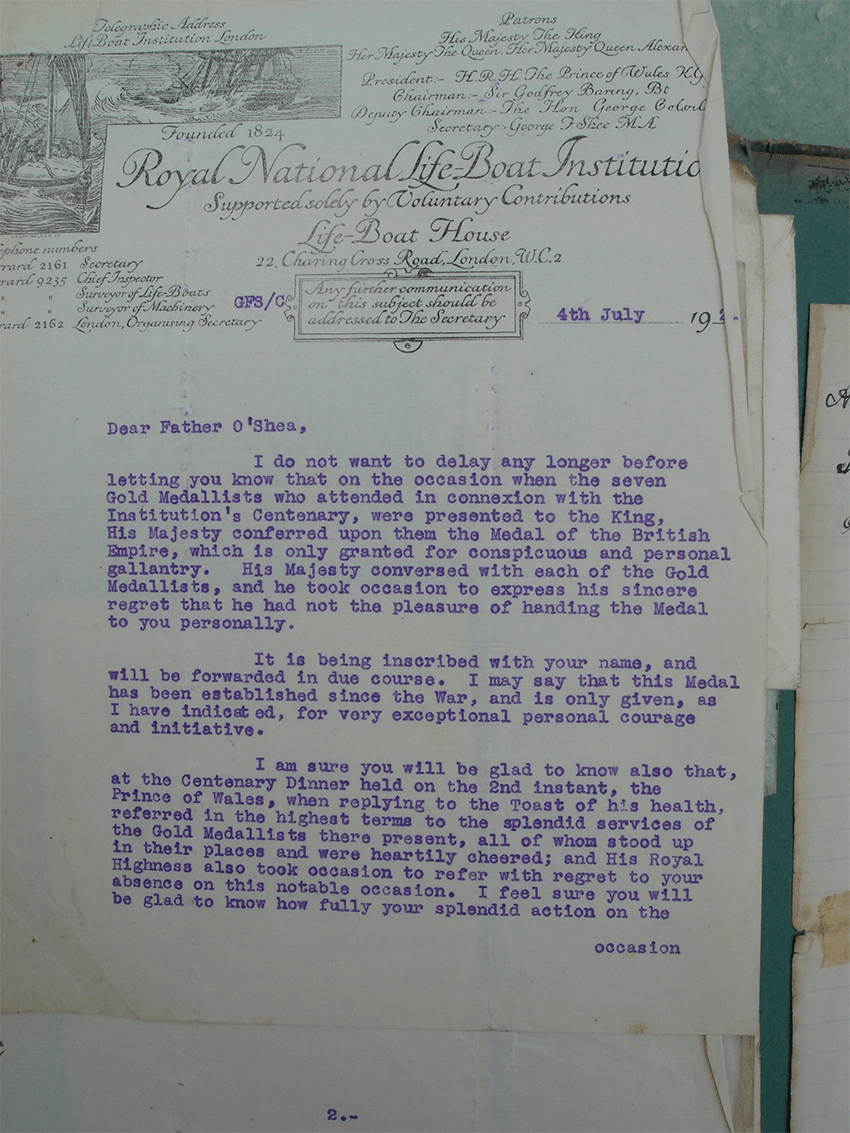