Over a beautiful bay, close to the border of Cork and Waterford, on Ireland’s Ancient East Trail stands one of the best-preserved examples of a Round Tower in the country.

Built in the 12th century, it provides a great day out for families with children, couples, and even walkers enjoying the beautiful surrounding ruins of Ardmore Cathedral.

So pack your car and come and visit this truly wonderful location. 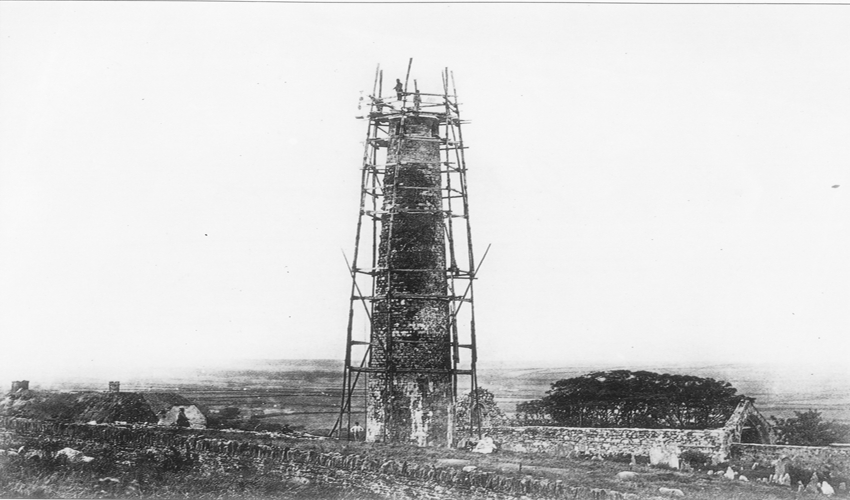 Don’t miss the many hidden treasures including the Cathedral Arcade, St Declan’s Oratory and Ogham Stones, and family tombs.

If you like to unpeel the layers of history, then you’ll enjoy this extract from the Journal of the Kilkenny and Southeast of Ireland Archaeological Society written in 1898.

“The Round Tower ranks next in archeological importance, Fortunately, the Ardmore tower is in an excellent state of preservation, thanks to the care and repairs of the Board of Works, in whom, with the cathedral and oratory, it is vested as a national monument. From the study of its details the character of its doorway with its regular radiating arch, etc., it is evident that Ardmore is one of the latest, if not absolutely the very latest of the Round Towers. We can in fact fix on the 12th as the century of its erection. The tower is about 1oo feet in height by 15 feet in diameter at the base, and the door, placed at the height of 16 feet from the ground, measures 6 feet high by 27 inches (tapering to 23 inches) in width, while the wall, measured at the door, is 40 inches thick.

Two particular features of our tower are so remarkable as to be, perhaps, unique, viz. the series of sculptured corbel stones which project between the floors on the inside, and the four projecting belts of masonry which divide the tower in five zones or sections exteriorly. As the tower is at present unprovided with lofts or ladders, access to the summit is impossible this is fortunate for the tower to be distinctly disappointing to the scribbler, who loves to deface venerable monuments with his contemptible initials. In repairing the tower some years since it was necessary to remove the conical cap and some few feet, of the upper storey, but all was carefully re-set, the original stones being placed, wherever possible, in their original positions. Excavations made at the base of the tower disclosed the fact that the latter was erected in an already existing cemetery. Skeletons were found below the foundations, between within their circuit, in such a position that the internment of the bodies must have been long previous to the building ‘of the tower.

A much-worn object of stone (perhaps it was a cross), which originally surmounted the cap, is now preserved within the cathedral. As our tower has characteristics that are unique, so it can boast-a history unique in the case of a Round Tower; it was besieged in 1642 by English troops under Lords Dungarvan and Broghil. The garrison of 40 Confederates eventually surrendered and all of them, except such as were required for purposes of exchange, were summarily shot. 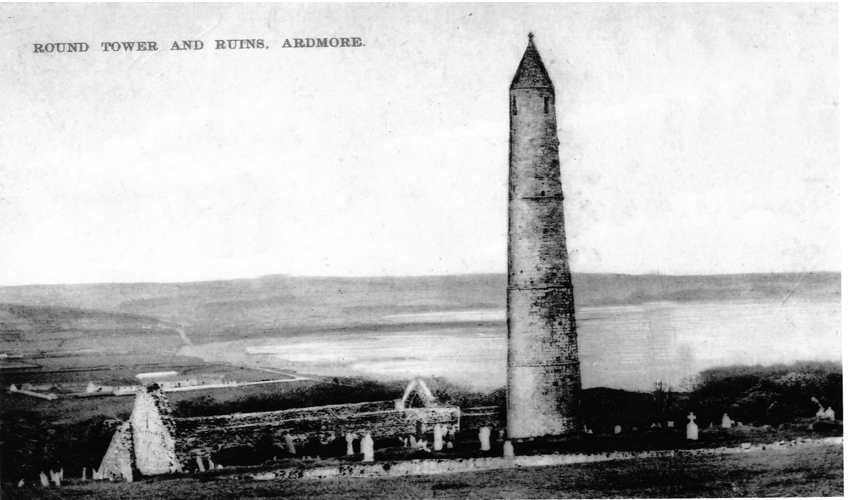 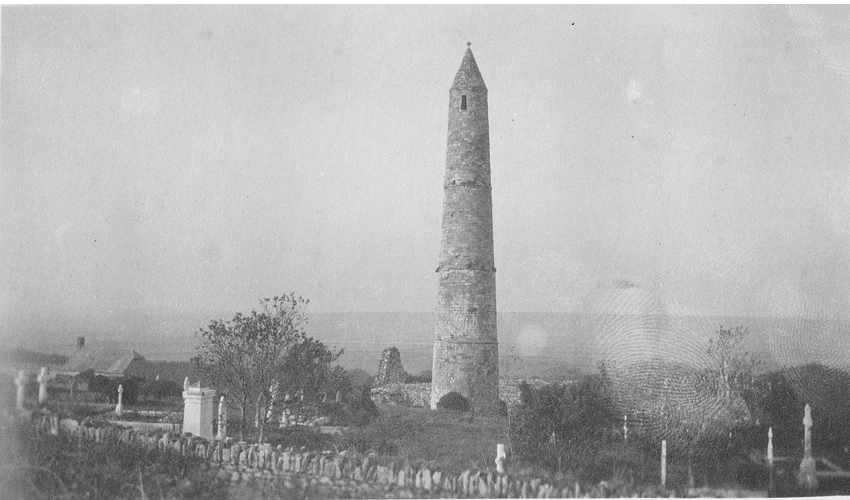 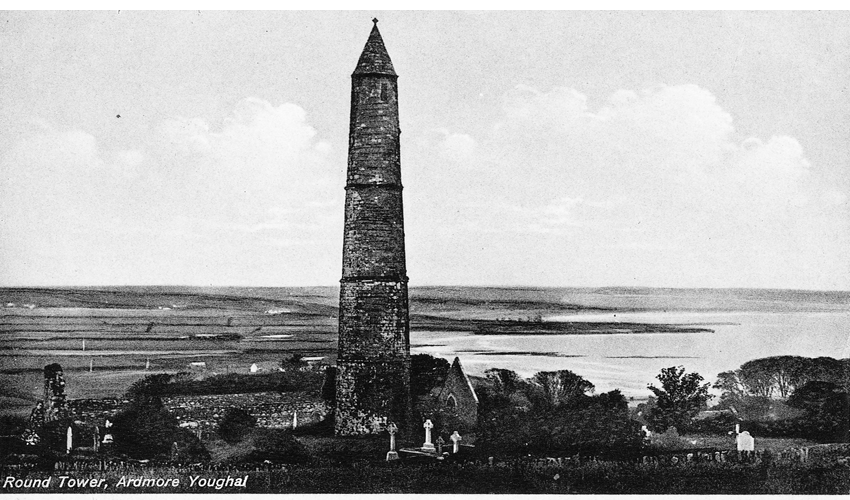 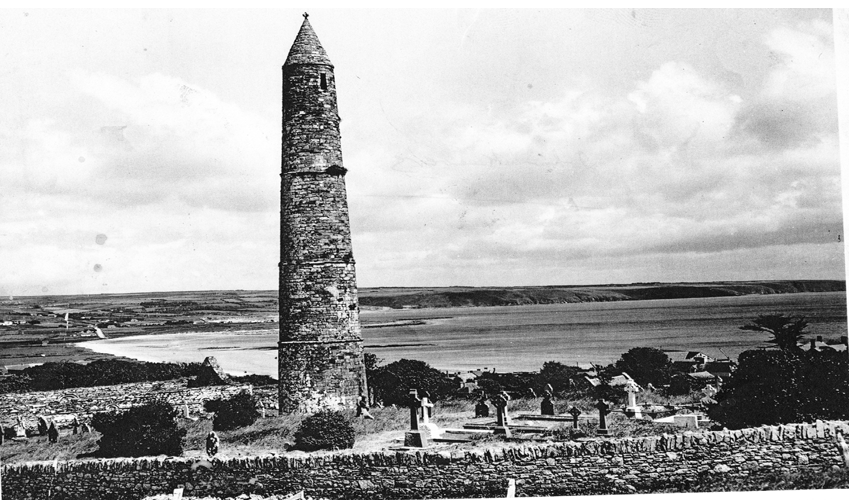 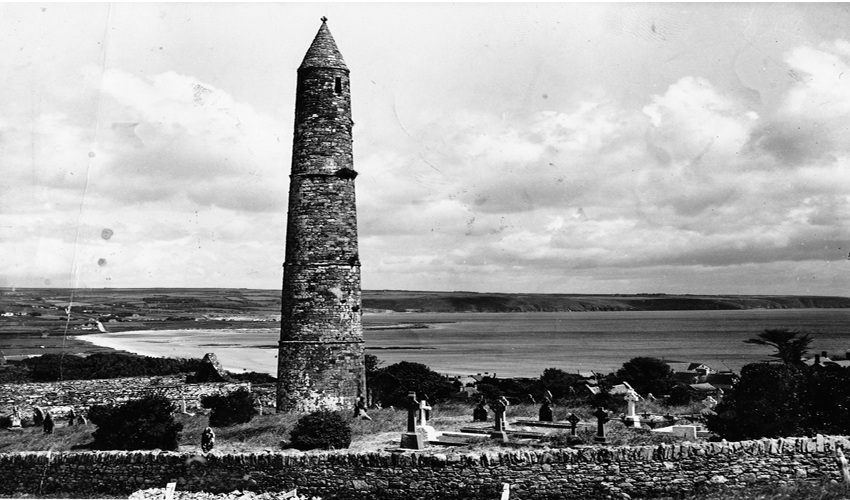 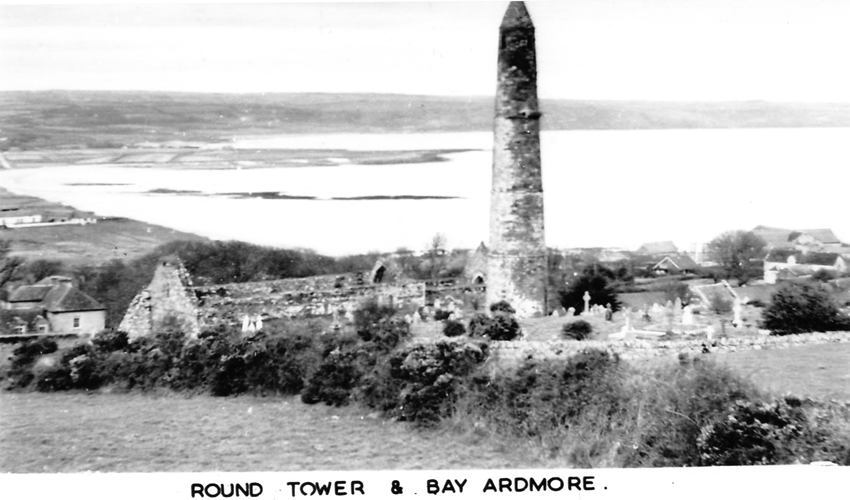 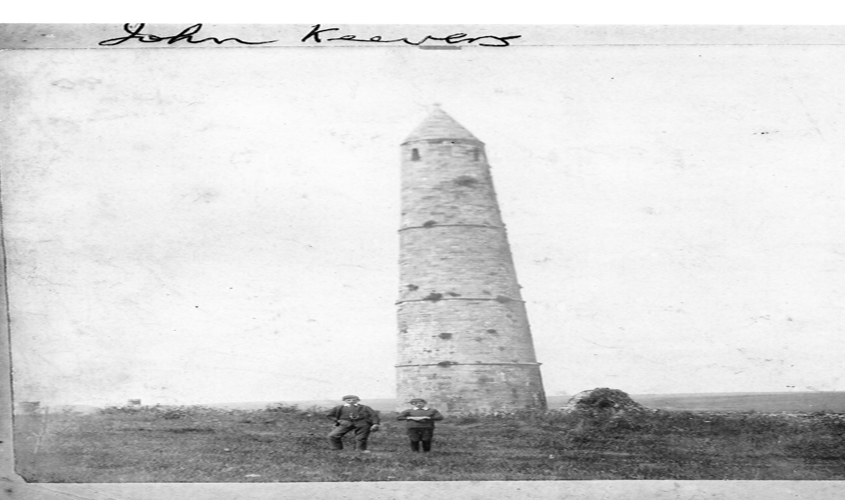 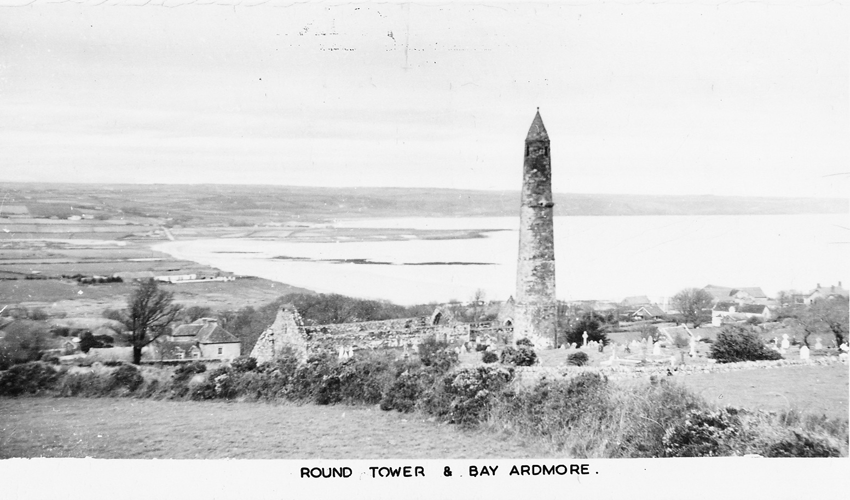 Reference to the capstone appeared earlier in the Journal of the Kilkenny and South East of Ireland Archaeological Society 1867 (Volume VI):

“In reply to a letter of the Rev. Mr. Graves, respecting the capstone of the conical top of Ardmore Round Tower, county of Waterford, blown off in the storm which took place at the end of February last, Mr. R. R. Brash, Architect, Cork, wrote as follows:

“The Ardmore cap-stone presents nothing to photograph. The conical top of the tower was finished by two stones, or what was probably one stone originally, but which had opened in a vertical joint by the action of the weather. The stone is about 16 inches high; and I don’t think it likely the old builders would have made the finish with an upright joint. The surface is very much weather-worn and disintegrated, but has no sign of carving or tool marks whatever; there is a sort of welt, or slightly raised ridge on one of the stones, but this is caused by the action of the weather, leaving a hard part of the stone prominent; the top is rounded and worn, but there is no appearance of a mortice or any preparation for holding a cross (such as is said to have surmounted the cap) or any other finish; and there could have been none, as the stone now described was the sole finish the tower had. The rest of the cap of the tower is in a very shaky state. I hope Mr. Odell, the proprietor, will take some steps to preserve it from further destruction.”

Mr. Bracken, County Inspector, said he was quite sure, from

Mr. Odell’s well-known taste and public spirit, that gentleman would take the utmost care of the tower. 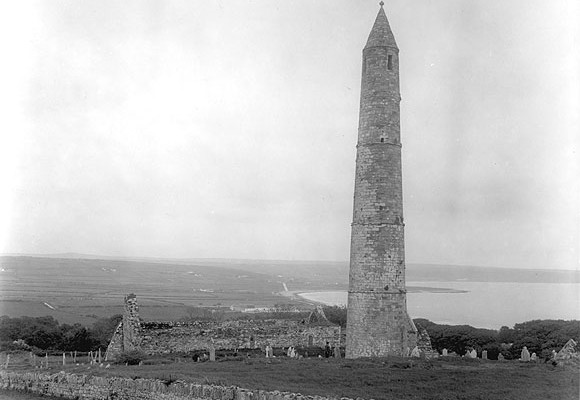 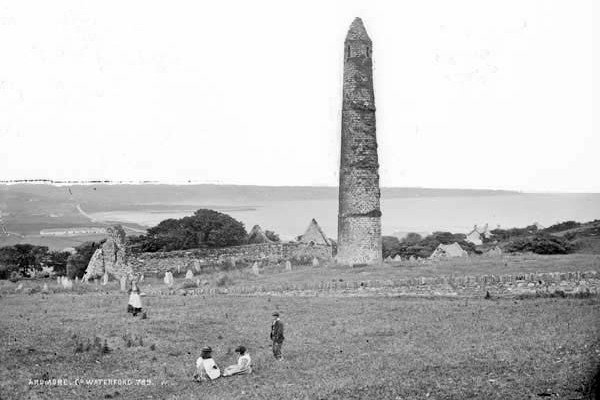 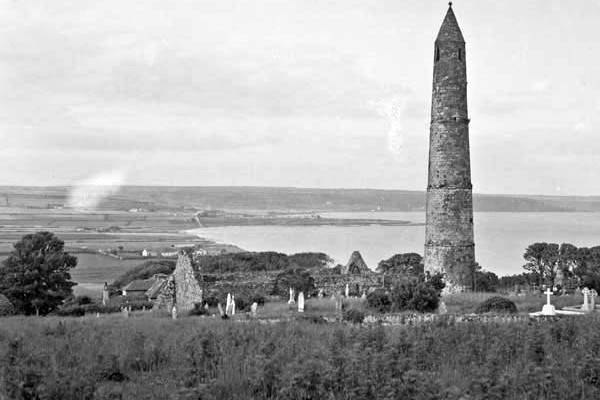 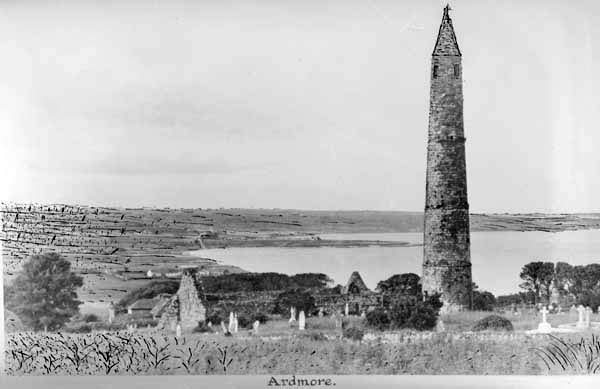 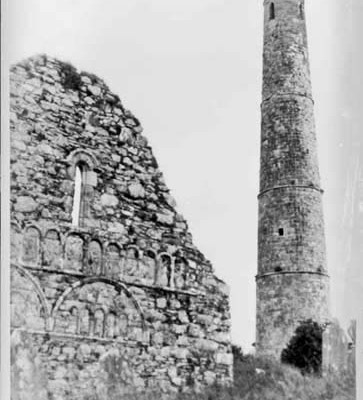 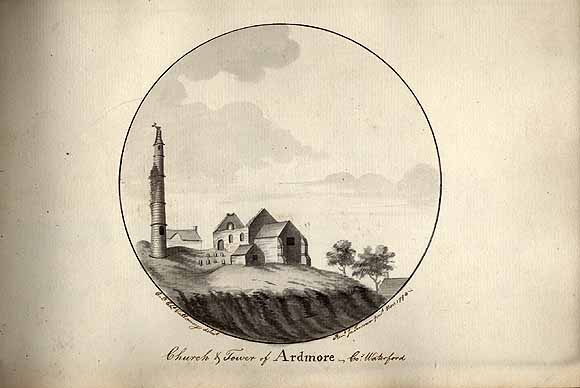 Tags: The Round Tower Ardmore Waterford