There are many great reasons why Ardmore is famous. Its heritage leads the way as part of Ireland’s Ancient East.

And, here’s just one of them.

St Declan founded a seminary in Ardmore circa 416. The Holy Well at the beginning of the Cliff Walk served as a baptistery for St. Declan who Christianised the area of Decies before St. Patrick came in 431 A.D. They met a number of times at Cashel. St. Declan later retired for greater seclusion to a little cell he constructed at the spot where now stands the ruined church beside the Holy Well. There is no uniform date for this church; the western section is the earlier construction, whereas parts of the eastern end show signs of 14th-century work. 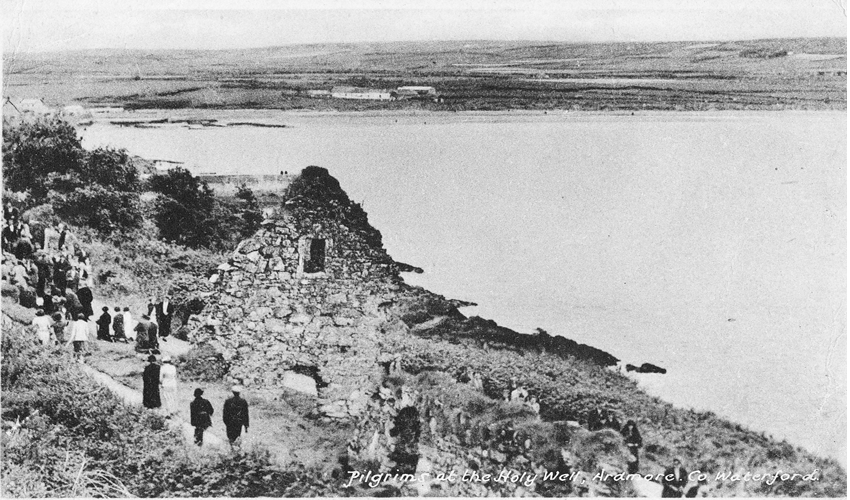 The Holy Well is dedicated, like every other ancient monument in Ardmore, to St. Declan. Three rude crucifixions (apparently late medieval) in stone have seen built into the modern masonry which surmounts the well. Rounds or  Stations are performed at the well and church ruin by thousands of persons on each recurring feast day of the saint (July 24th) or on the Sunday within its octave. At midnight on the 23rd of July, a mass sometimes celebrated at the Well.

The following is quoted from a local paper [Dungarvan Observer 1936] under the heading “St. Declan’s Well, Ardmore”: “A young local man writes stating that on his first visit to St. Declan’s Blessed Well at Ardmore he was cured of an ailment which the doctor had failed to cure. He exhorts people to visit the Holy Well on July 23rd  and 24th each year.” 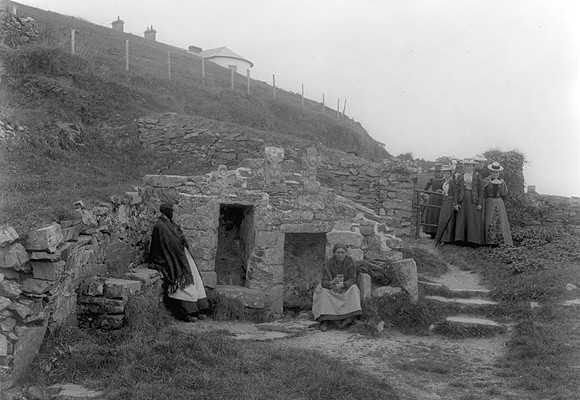 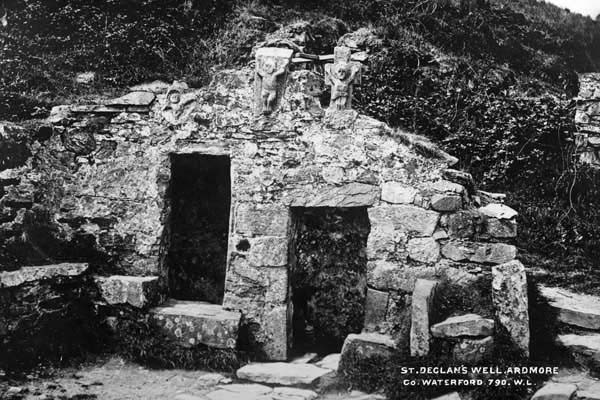 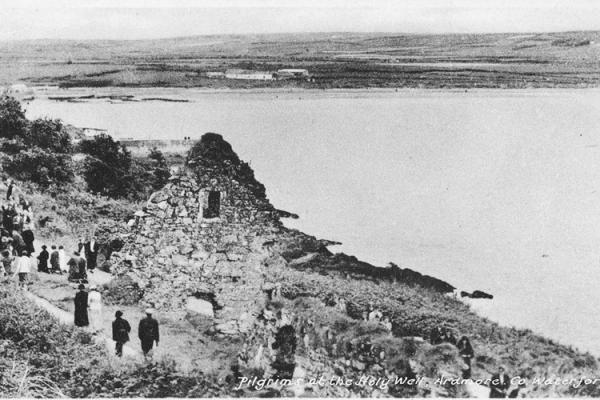 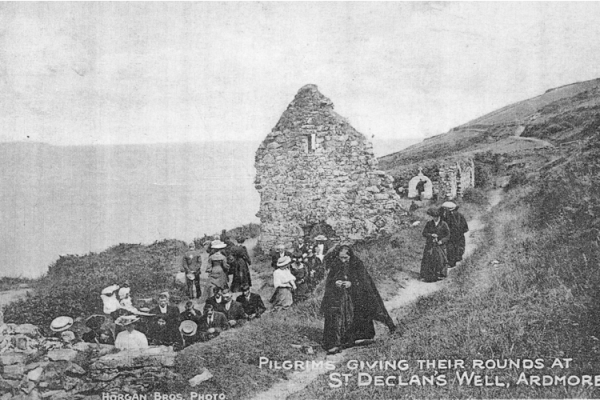 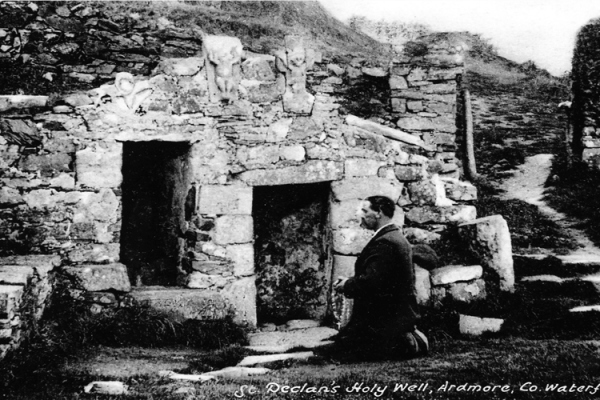 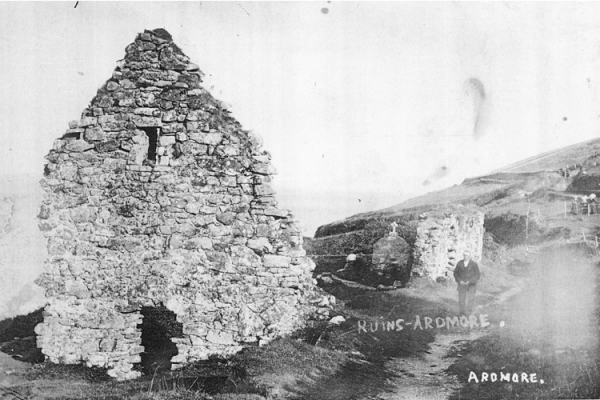 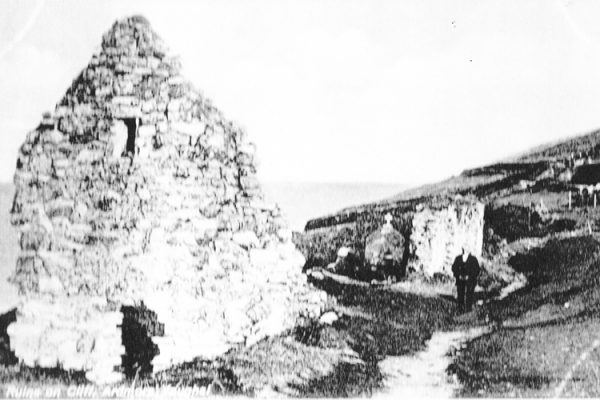 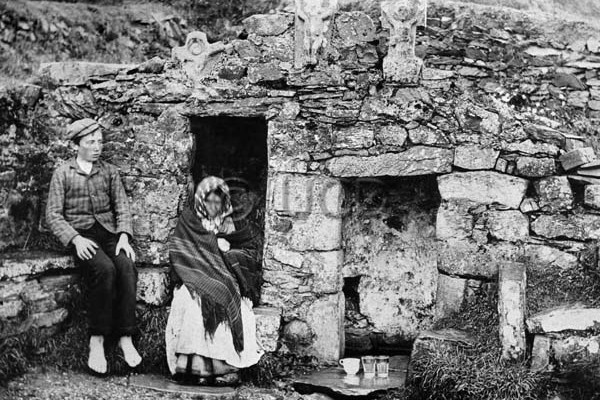 The rounds at the Holy Well are now the central feature of the Pattern – cults involving water are more adaptable to Christian doctrine. Attempts to suppress the Pattern on grounds of pagan practices had failed at Ardmore as elsewhere. In 1900 a few thousand pilgrims are still visiting Ardmore on the 24th of July.

From the early 1900’s the records start mentioning that the main gathering takes place on ‘Pattern Sunday’ – the Sunday nearest the 24th July, Canon Power says that under a kind of ecclesiastical semi-approval a revival of the celebration commenced. Fr. John Walsh P.P. obtained an indulgence in 1903 from the Holy See for the celebration in the church. These services ceased after some years, however. It is possible that the midnight vigil on the eve of the 24th of July developed as a reaction to this. (Taken from the Ardmore Journal)

The Kilkenny and the South East Archeological Society 1898 wrote that:

DYSERT Church – The remains of this church, which stand on the cliff edge half a mile to the east of the buildings just described, are by no means in a good state of preservation. Indeed little more survives than the ruinous west gable and portion of the south side wall with its doorway. The church was erected on the site of a little cell, built for himself by Declan in his old age when he wished to escape the concourse of pilgrims who flocked to Ardmore.

In this cell, which, says the “Life” already alluded to, he loved very much,’) the great apostle of the Desii breathed his last, consoled by the ministrations of his disciple, St. Liach, Moelethrim O’Dhuibe Rathra, a 13th-century bishop of Ardmore, is credited with the erection of the church now in ruins. Unfortunately, the doorway is so much disfigured that but little as to the age of the building can be deduced from it with certainty. The inverted keystone of the flat arch over the doorway has puzzled many a budding architect. Can you solve the puzzle, reader?

ST. DECLAN’S WELL – Besides the min last described is the Holy Well dedicated, like every other ancient monument in Ardmore, to St. Declan. Three rude crucifixions (apparently late medieval) in stone have been built into the modern masonry which surmounts the well. Rounds or “stations” are performed at the well and church ruin by thousands of persons on each recurring feast day of the saint (July 24th) or on the Sunday within its octave.