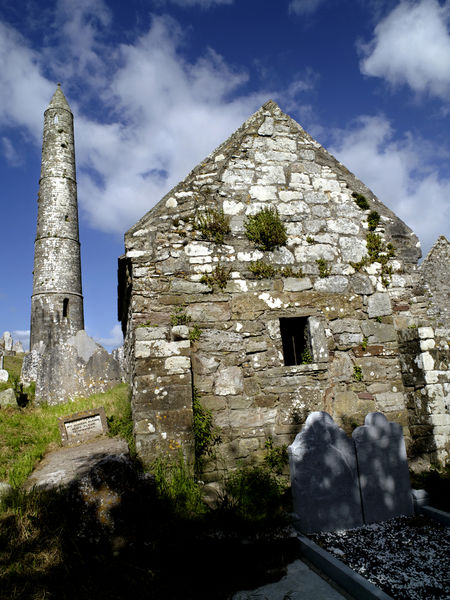 Immerse yourself in the history, myths, and stunning beauty of Ardmore.

For centuries this small seaside village and coastline has fired the imaginations of writers, and artists.

Now it’s your turn to be inspired.

St. Declan’s Oratory or An Beannachan can be found to the east of the cathedral and is the smallest and oldest building in the graveyard. It is possibly 8th century. The upper walls and roof were restored by Bishop Mills in the 18th century. It is traditionally taken to be the burial place of St. Declan, and a hollow in the south-east corner is said to be his grave. The Lugudeccas Ogham stone was found in the gable.

The Kilkenny and the South East Archeological Society 1898  wrote that:

RELIG DEGLAIN – This building is also called by the Irish speaking population, beannacán, a word which seems to signify the little peaked or horned building, in allusion probably to the original high pointed gables characteristic of these oratories. In the 12th century life of St. Declan, published by the Bollandists from the Irish original in Louvain, the burial-place of St. Declan is called by a Greek word Levitiana, which the learned editors acknowledge themselves unable to translate. It is plain from the Bollandists that the building was regarded 700 years ago as the saint’s actual place of sepulture. The “Life” moreover, implies that the cell was in existence in the time of St. Declan, and the truth of the implied statement is borne out by intrinsic evidence. Our oratory is in fact one of the very oldest buildings in Ireland – a primitive 6th-century cell of the type almost confined to the Isles of Aran and other all but inaccessible islands on the western seaboard.

Its exact measurements are 18 feet 4 inches by 8 feet 9 inches on the clear; the height of the side walls is IO feet 3 inches and the present gables, which are not original, rise about six feet higher still. A single window of a most primitive character -its head fashioned out of a single stone-lighted and still lights the chamber from the east, and, as is usual in such structures, a square-headed door with heavy lintel and inclining jambs afforded access from the west. The present entrance is modern.

A close examination of the primitive door will show traces of a bevel on the interior of the jambs. Antae in the characteristic Irish style project on both east and west gables: Those on the eastern end stand out 23 inches, while the projection of the western antae diminishes to 19 inches. The whole building has been much repaired in recent times. Not a trace of the ancient stone roof remains. . The upper portions of the gables as well as the greater part of the south sidewall are modem. Underneath, however, may be studied the easily recognised Irish masonry of large sandstone blocks. But little mortar is apparent, and no dressing except at door, window, and quoins. Within this diminutive and most venerable church is the traditional grave of the great founder of Ardmore.

Generations of reverent clients have scooped out and carried away the sanctified earth from his narrow bed so that the latter has come to be a mere rectangular, and by no means shallow, pit in the floor of the ancient building