Did You Know That There Was A Castle In Ardmore? 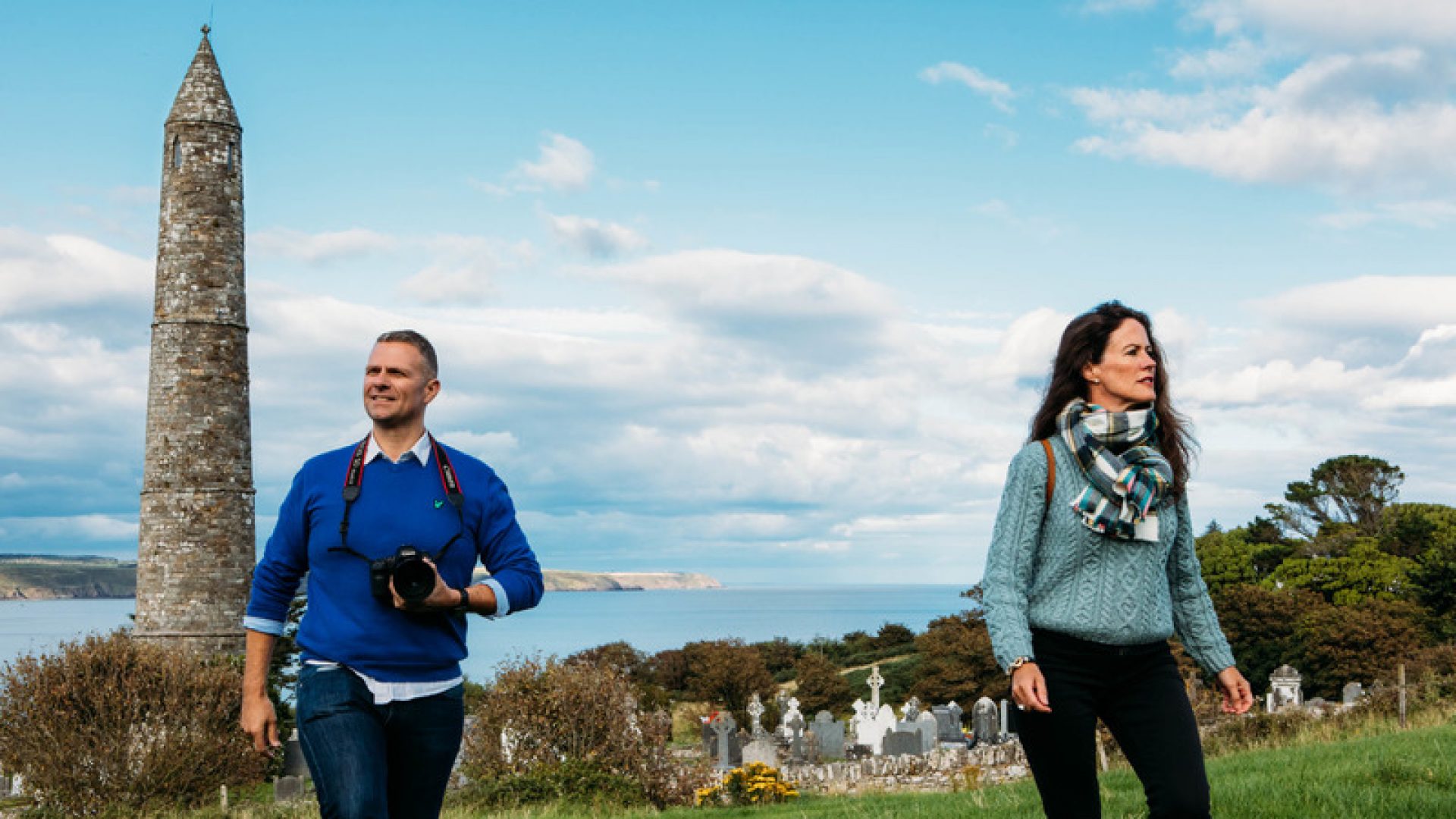 Even in the height of summer, the small village of Ardmore always seems peaceful.

It also doesn’t seem designed to be defended.

So just imagine when a mighty force entered the village to lay siege. Canons being called. A village under attack. And, then what concluded in the mass execution of prisoners of war.

But, this is not a work of fiction.

It actually happened on a historic day in 1642.

How do we know?

Anyone who’s been fortunate to read the eyewitness account of the siege of Ardmore in 1642 may be wondering where Ardmore Castle was located?

Well, the sad answer is that we really are not that sure.

We have however found some further reference points which may help to identify its location a bit better.

The Journal of Waterford and South Kilkenny Archaeological Society in 1898 is a great starting point for a discussion for Ardmore Castle Co. Waterford

“The following items respecting Ardmore Castle – for an account of whose siege (in January number of the Journal) we are so greatly indebted to Mr. James Buckley, London – are taken from a now extremely rare little work, by that devoted antiquarian, the late Mr. Edward Fitzgerald, of Youghal, which was published in 1852 under the title, “A Hand-book to the ‘Holy Citie’ of Ardmore, by F.  Ochille (i.e., Fitzgerald, Youghal). Youghal, printed by  John W. Lindsay “Little now (1852) is left of Ardmore Castle to remind us of its past importance but irregular grass-grown heaps of rubbish and the remnant of its ancient fosse. Originally it covered a considerable area, as the remains of its outworks appear extensive still-the fosse extending down the side of the hill and across the road to the village. The fields here still retain their ancient names, and as Monere-a-cushlane, i.e., the Castle Meadows. Some of the houses in the village, we have been informed, were built from the stones of the ruined stronghold. The castle originally belonged to the Mernin family, and Smith, in his History of the County of Waterford, says he saw a deed of the date 1197 settling lands here on the Mernins by a Danish lady named Christiana Hydorothy – the Danes having had a considerable settlement at Ardmore. This would give grounds for assigning the foundation of the castle to the beginning of the thirteenth century, that is, soon after the deed of settlement. In 1497 Perkin Warbeck, the Pretender, occupied the castle for a brief period. From it he sent his summons to Waterford to surrender to him, and left his wife in safekeeping there whilst – he went to besiege that city. 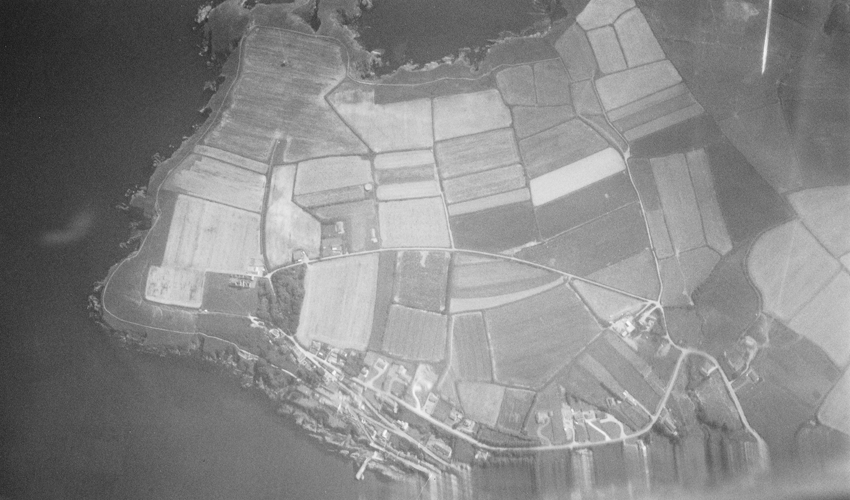 The ‘Annals of Youghal’ for 1852 (by Canon Hayman), record that “in 1591 the manor, lordship, and castle of Ardmore were leased to Sir Walter Raleigh for IOO  years. But in 1593 Sir John Dowdall, knight, late of Piltown, ejected Raleigh, and kept possession for many years.” In Frazer’s Magazine, for 1845, it is stated that in the early part of the 17th century Ardmore Castle was inhabited by Sir Edward Harris, Chief Justice of the Court of Common Pleas who is said to have lived here in a style of cumbrous magnificence like an ancient feudal noble. He owned the rectorial or great tithes of Ardmore, which’ were then mostly paid in kind, and as the tenth of everything was demanded, the courtyard of the castle and the buildings around it were crowded with flocks and herds and gorged with corn, etc. Chief Justice Harris had a numerous family, one son and twelve daughters, and it is said that whenever he went to visit any of the nobility or gentry of the county he rode at the head of so numerous a train that it covered a mile of ground. It is also said of him that he kept at one time no less than seventy broodmares of a peculiar breed. One enduring memento of Lord Harris as the country people sometimes call him is a well near the gate of the Protestant church, which is named after him the Justice’s Well.” In 1692 the castle was besieged and taken by Lord Broghill, a son of the Great Earl of Cork, and 140 of the garrison put to the sword. (This was the siege of which Mr. Buckley has furnished the Journal with a contemporary account.) The last record we have of Ardmore Castle is that in the early part of the eighteenth century Mr. Odell’s great grandfather kept hounds in it when he visited Ardmore and that some 50 years subsequently considerable portions of this stronghold were standing.”

“Kinsale beg is opposite to Youghall, where the church was roofed and covered by Bishop Milles, but all the Protestant inhabitants leaving the Parish it was not finished. Near it is Prospect Hall, the seat of Mr. Bernard, from which there is a fine view of Youghall on the river which is built up the side of a hill, a little like the situation of Constantinople, to the southwest was a fine Strand four miles long, but by some accident was spoiled for riding: Pilestown is the estate of the Walshes

Ardmore. where judge Walsh lived, who is supposed to be the author of the forged Commission in favour of the Irish  Rebels, in the time of King Charles the first, according to the Author of the County of Waterford. We now leave the river and turn eastward along the shore and soon came to Ardmore, the great (head or height) from a head of land at this place; It was anciently the See of a Bishop Patrick founded by St. Declan of this county who was the first Bishop, about the time of St. Patrick: They say, he founded a Monastery here, which might be at the old church over the Sea-cliff; where there are remains of a very ancient building; the Cathedral probably was where the present parish church is, at the west end of which are some curious old reliefs of Saints, of Adam and Eve, etc: the chancel only is covered for the Parish church. Near it is a small square building where St. Declan is buryed: there is the finest and best-built round tower here in the  Kingdom, fifteen feet in diameter and above a hundred high, it is divided into five parts by four water tables, there are at the top two or three beams of timber for hanging a Bell, for which use it certainly served, there being very plain channels in the stones at the bottom of the door worn by the ropes.

There are also remains of an old Castle here; on the head of land were formerly lead mines, and searching of late for ore they found they were worn out, This parish extends a great way into the mountains to the north and four miles to the eastward.

There is a great Pattern held here on St. Dedans day and penances are performed by creeping under a stone, concerning which they have some strange tradition: old mines also are seen over the mountains, which if I mistake not, are said to have been Iron mines.”

“Smith, our county historian, tells us that, in 1197, a Dane of Ardmore settled a tract of land, in that ancient cathedral town, on a family called Mernin; and, “this tract continued in the same name and family to the year 1745, when they sold it“  Ardmore Castle was built at this time: it certainly dates from the period 1191-1198.

Wm. Wenman Seward, Esq. in 1797 in “The topography of Ireland, ancient and modern. Giving a complete view of the civil and ecclesiastical state of that kingdom; with its antiquities, natural curiosities, trade, manufactures, extent, and population” also makes reference to the ruin of a castle

Curiously there is no mention of the castle ruins in an 1810 edition of A topographical dictionary of Ireland: exhibiting the names of the several cities, towns, parishes, and villages … Collected from the most authentic documents, and arranged in alphabetical order: being a continuation of the topography of the United Kingdom of Great Britain and Ireland / by Nicholas Carlisle, Fellow, and Secretary of The Society of Antiquaries of London.

So where was it located?

If you have any further information on Ardmore Castle, we would love to hear from you.