A New Way To Talk About Ardmore: Get Inspired By The Beauty Of Ardmore’s Round Tower

Step into Ardmore’s Golden Age of Saints and Scholars and visit the Round Tower of Ardmore. Trace the steps where Ireland’s pioneering saints and monks wrote some of the world’s greatest manuscripts. And, how they spread their learning and spirituality throughout Europe locked in the Dark Ages.

Be inspired, as all visitors are, by the wonderful Round Tower of Ardmore. And, let your imagination take flight in the shadow of this tower as it stands watching forever out over Ardmore Bay.

Ardmore’s Round Tower, built in the 12th century, is one of the best-preserved examples in Ireland. Round Towers were built by the monks of early Irish monasteries as places of refuge in case the monastery was attacked. If the monks suspected that the monastery was in danger, they would move all their valuable books and treasures into the tower and pull up the wooden ladder. Though hostilities against monasteries increased with the Viking raids in the 9th century, monks were often in as much danger from native Irish chieftains. 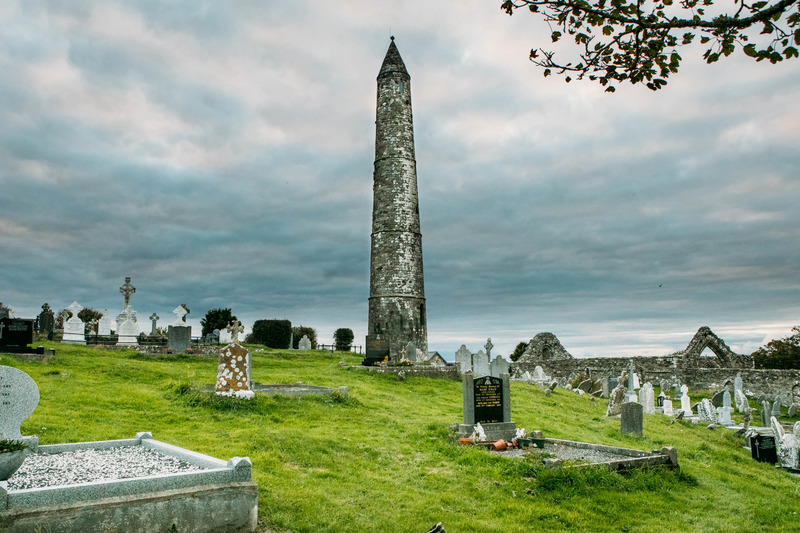 The Round Tower ranks highly in Ireland in terms of archeological importance. And, fortunately, the Ardmore tower is in an excellent state of preservation.

The tower is about 100 feet in height by 15 feet in diameter at the base. The door, placed at the height of 16 feet from the ground, measures 6 feet high by 27 inches (tapering to 23 inches) in width, while the wall, measured at the door, is 40 inches thick.

Two particular features of our tower are so remarkable as to be, perhaps, unique.

First, the series of sculptured corbel stones which project between the floors on the inside. Second, the four projecting belts of masonry which divide the tower into five zones or sections exteriorly.

As the tower is at present unprovided with lofts or ladders, access to the summit is impossible.

Excavations made at the base of the tower disclosed the fact that the latter was erected possibly in an already existing cemetery. Skeletons were also found below the foundations. These were in such a position that the internment of the bodies must have been long previous to the building ‘of the tower. Read more about The Skeletons Of Ardmore Round Tower.

As our tower has characteristics that are unique, so too it can boast a history unique in the case of a Round Towers. It was besieged in 1642 by English troops under Lords Dungarvan and Broghil. The garrison eventually surrendered and all 120 of them, except such as were required for purposes of exchange, were summarily executed.