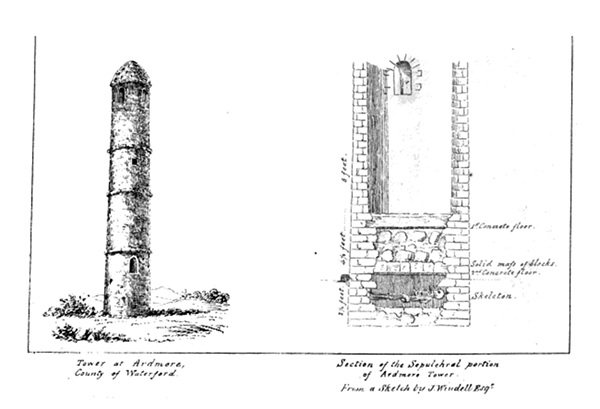 It’s a question that we’ve all probably asked and maybe we’re all treasure hunters in our dreams.

But, what if a little digging could you tell you more about what lies above the ground?

Well, here’s a bit of history that proves this point perfectly.

We include an extract from The Gentleman’s Magazine: Volume 173 – January 1, 1843
The tower of Ardmore, in the county of Waterford, stands on the coast near the entrance of Youghal Bay; it is above 100 feet in height, 45 in circumference, 15 in diameter, divided by projecting bands into four stories at unequal distances; the door is 15 feet from the ground; the projecting bands are a remarkable feature, and assimilate it in appearance with the Indian towers of Boglipoor. Relative to an excavation made in the summer of 1841 at this tower, Sir W. Betham quotes the following correspondence.
Extract of a letter from Mr. Odell, concerning the excavation at the Tower of Ardmore :
“It must be fresh in your memory that, in the former excavation, I had to sink through a mass of very large stones, so closely packed together, that it was not easy to remove them, but without any mortar, except where they approached or’joined the wall of the tower. This description, however, applies to the two or three lower courses of the stones, for the upper were not so close. Your letter, however, and a little of my own curiosity, determined me on sinking deeper. To work, therefore, I went yesterday, and came at once upon regular courses of immense unhewn stones, so packed and joined in with the surrounding work, as appears to have formed part of the original structure. These stones were so close, that it was almost impossible to get a crow-bar between them, and they were removed with great diﬂiculty. At length, we got up the last of them and found they had been lying on a bed of mortar, quite level and smooth. This mortar was exactly level with the external base of the tower, and I naturally concluded we had arrived at a ne plus ultra, but, to my great surprise, the crow-bar went through into soft mould. So down we still went, the stones standing around like the sides of a wall, and about a foot lower down, across the centre of the tower, and lying east and west, we found a HUMAN SKELETON But pray come and see things yourself.”

Letter Extract of a from Mr. Hackett: Middleton, 29th July 1841.
“Let me now relate our proceedings since I wrote. Windele, Abell, and Keleher, joined me, and we met Mr. Odell at Ardmore; and, on descending, we found everything at the bottom of the tower as described in Mr. Odell’s letter, except that the bones had been collected in a basket, the head and feet not having been extracted from the foundation, where they were so embedded, that they could not be extracted. Mr. Odell’s letter described the labour in reaching the bottom; let me now describe what appears to have been the manner in which the builders of the tower proceeded. They ﬁrst went about ten feet, or more, below the surface, and there laid their foundation of large rocks; about four feet from the bottom they laid the body across, the head and feet resting on the rocks at the opposite side, the body lying on a bed of mould, four or ﬁve feet diameter; they then continued to carry up the foundation, the ends irregularly serrated, so as to overlay the head on one side, and the feet on the other, they then covered the body with about two feet of mould, which they covered with a ﬂoor of mortar; over this, they wedged in, with such force as to render them impervious to ordinary labour, large blocks forming a compact mass of unhewn stones, and above them, another layer of similar stones, but not so compact; over this were indications of another mortar ﬂoor, which, is only visible at the edges, indicated a former attempt at exploration. Only about one course or two of large blocks were laid higher than the outside plinth; above these was a loose mass of small stones, ﬁve or six feet deep, of the same kind of stones as the substratum of blocks, all of which are diﬂ’erent from the stone of which the tower was built. I am thus minute in the description, because it has been suggested that, as the skeleton was found lying east and west, as the bodies do in the surrounding cemetery, the tower had been built over a grave unknown to the builders. This induced me to examine it with more care, and I took with me an intelligent mason, who agreed with me that this tower was certainly intended as a sepulcher, for the whole was carefully and artiﬁcially prepared for that purpose; ﬁrst, laying down a concrete ﬂoor, then four successive layers of mason’s work, and ﬁnally, above these, a second ﬂoor of concrete; all this would not he accidentally built over a body previously deposited, for the last ﬂoor and the walls rest on the solid rock.
“ On the 29th of July I received a letter from my friend, John Windele, of Cork, Esq. conﬁrming Mr. Hackett’s statements; and on the 18th of August following, one from Mr. Odell, stating that he had discovered a second skeleton, so embedded in the solid work of the tower, he had ‘ not been able to extract it, but that it can be got out without, in the slightest degree, interfering with or endangering the foundation, which rests, as I had anticipated, upon the rock.’ This last circumstance clearly demonstrates the suggestion of the tower having been built over a previous grave to be erroneous.
“ In a subsequent letter, dated 17th August 1841, Mr. Hackett sent me drawings of a section of the tower, with ﬂoors, masses of stone, and the mould, with the body in situ, and also of the several grotesque sculptures in the interior of the tower.” Vol. II. p. 214. The passage marked in italics in Mr. Hackett’s letter, which asserts that the tower of Ardmore was not built over a previous sepulchral deposit, is a very important conﬁrmation of the opinion we are disposed to adopt relative to these ediﬁces. That they were almost always adjacent to some monastic establishment has been before observed. They were popularly designated by the Irish as clogteac, i.e. campanilia or belfries, and we are little inclined to believe that this appellation is a corruption of leactard “monuments of the dead.”
Share this: