An Astonishing Bonanza To Soar In The Footsteps Of Wonderful Danes, Druids, and Saints

Take a break. Forget your problems. And, just sit back and soak in the beauty of the Round Tower in Ardmore.

Explore this wonderful location at your own pace. And, enjoy a setting that has inspired people for 100’s of years.

As you walk around the Tower, you’ll not be surprised to learn that this Round Tower is also shrouded in mystery.

So, who built it?

When you get up close to the stories of Ardmore’s past, you’ll hear tales of druids, Danes, and saints as recounted by researchers in such inspiring ways.

Take in the passion of their writings as they explore the purpose of Ardmore’s Round Tower.

In The history of Ireland, from the first colonization of the country, down to the period of the English invasion, comprehending the topography of the scenes of battles, and memorable events, as well as a review of the rise and progress of Irish literature and the fine arts … By George Pepper (1835) discusses:

“It is time we should now speak of the round towers, which are,  in a manner, peculiar to Ireland, and which have occupied the ingenuity of so many learned antiquarians to explain their original use.  Some have attributed their erection to the Danes, who are supposed  to have used them as telegraphs, by placing a light in the aperture  on their convex roof; others say, among whom is the learned Vallancey, that they were built by the Milesian Druids, as fire-altars;  but Dr. Milner very justly rejects this opinion, by observing, ” that  there was no occasion of carrying them up to so great a height as  130 feet.” 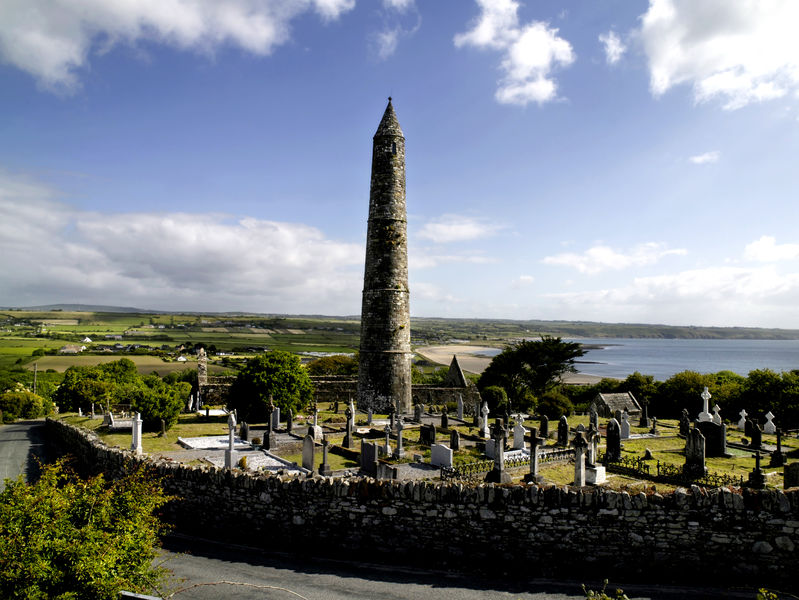 A third system is, that they were watch-towers, raised  in times of intestine warfare, to prevent an enemy from taking the  dun of the chief by coup de main; another hypothesis is that of Molyneaux and Dr. Ledwich, who maintain with a great force of  reason, and. an air of strong probability, that they were belfries to  the churches, near which they are situated. To this well-founded  conjecture we subscribe, because there is not one of these towers in  Ireland which is not quite contiguous to a religious edifice; a fact  that sustains the probability that the round towers were belfries,  and built simultaneously with their adjoining churches. Smith  brings another proof to the support of this opinion, in his history of  Waterford published in 1746, when he tells us, “that there was no  doubt but the round tower of Ardmore was used originally for a  belfry, there is towards the top not only four opposite windows  to let out the sound, but also three pieces of oak still remaining, on  which the bell was hung; there were also two channels cut in the  sill of the door, where the rope came out, the ringer standing below  the door, on the outside.

It is also to be observed, that the doors  of these towers are uniformly elevated fifteen feet above their base,  which has led to the conclusion that the Christian pastor was in the  habit of addressing the people from these high vestibules. It is the  opinion of antiquarians, that these round towers were built in the  sixth century, which has given birth to an argument, that, in that  case, they could not be originally intended for belfries, because bells  were not introduced into the Christian churches until the seventh  century; but this argument will vanish before the historical fact,  that during the pontificate of Pope Stephen, the congregations were  called to church by the sound of trumpets; so that the Irish round  towers might be trumpet-stands before the invention of bells. The  late Dr. Milner, it is true, worked hard to subvert this theory; he  says ” that none of these towers are large enough for a single bell,  of a moderate size, to swing round in it.”

Now, with all due   ”The round towers of Ireland,” says an Irish writer of historical learning and  antique research, ‘are great puzzlers to the antiquarians. Quires of paper, as tall  as a tower, have been covered with as much ink as might form a Liffey, in  accounting for their origin and use.”

“In despair of being able to ascertain at  what period, and by whom they were constructed,” says Moore, “our antiquaries  are reduced to the task of conjecturing the purposes of their construction. That  they may have been appropriated to religious uses, in the early ages of the church,  appears highly probable from the policy adopted by the first Christians, in all  countries, of enlisting in the service of the new faith the religious habits and associations of the old. It is possible, therefore, that they might, at some period,  have been used as stations for pilgrims, — for to this day, it is certain that the  prayers said at stations, are called Turkish or pilgrim prayers.”

We follow this account with a short article from the Proceeding of the Royal Irish Academy entitled The Round Tower of Ardmore. By Hodder M. Westropp, Esq. April 8, (1867)

“The summit of the cone of the tower of Ardmore was formed of two stones fitted together. There is scarcely any trace of carving or sculpture on them, they are so worn by the weather and defaced by time.

On the side of the larger stone is a kind of groove or fluting, very perfect for about six inches; a corresponding ornamentation was evidently on the other side. On the upper part is a slight projection, which originally may have been a carved ornament. The immediate top bears evident traces of something having been broken off.

The lower inner portion of each stone is hollowed out into a kind of angle, evidently, to meet a corresponding rise in the platform stone they rested upon. No iron bolt or rivet was used to firm them in their position. The two stones fitted together and formed the apex of the conical top of the tower. Some of the old people of Ardmore recollect seeing a cross on the top of it, which, it is said, was shot off some forty years ago by a gentleman firing at a crow perched on the top: Croker makes mention of it as being like a crutch.

This very probably was the remaining portion of an Irish wheel cross, such as is seen over the door of the tower at Antrim.

We hope that when you visit Ardmore’s Round Tower that you’ll be inspired, as they were, by its life and people. And, that you’ll celebrate its enduring legacy in this seaside village.