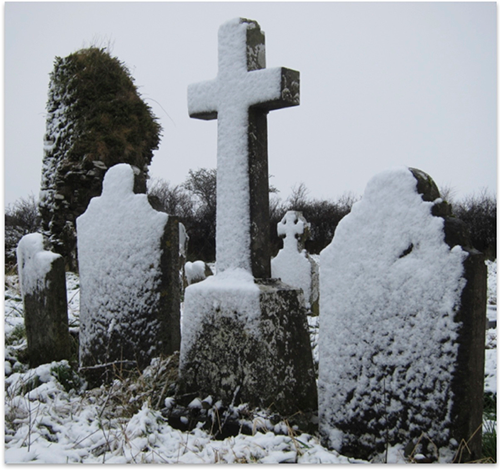 If you like to peel back history, you’ve probably noticed that so often the focus of old articles is on Ardmore. But, we were delighted to find this journal article from 1841. Although it ends with a somber impression of the area, it is well worth exploring. It also gives some valuable information on Grange in Waterford.

It is an ordinance survey completed by a John O’ Donovan in 1841 and describing the antiquities of County Waterford.

“SITUATION. This Parish is situated in the Barony of Desies Within Drum and is bounded on the north, east, and partly on the south by the Parish of Ardmore, and on the west by that of Kinsalebeg.

NAME. Is in Irish Gráinseach, meaning a granary or storehouse for corn where the farmers brought the tenth part of their corn for the use of the Clergy. Of the old Church of this Parish no part remains at present but the southeast corner and very small fragments of the side walls but from the foundations, it can be ascertained that it was sixty feet in length and twenty feet in breadth. Its walls were three feet one inch in thickness and built of slate stones and lime and sand cement. Its graveyard is still in use but contains no monument of antiquity.

In the Townland of Baile Eileain or as it is anglicized Ballylane, there is a holy well called Tobernamanrialta (Tobar na mBan Riaghalta) i.e, the Religious Women’s Well, at which Stations were performed on the 15th of August. It is said to have been dedicated to the Blessed Virgin but it never bears her name.

There is nothing else of any antiquarian interest in this Parish.”