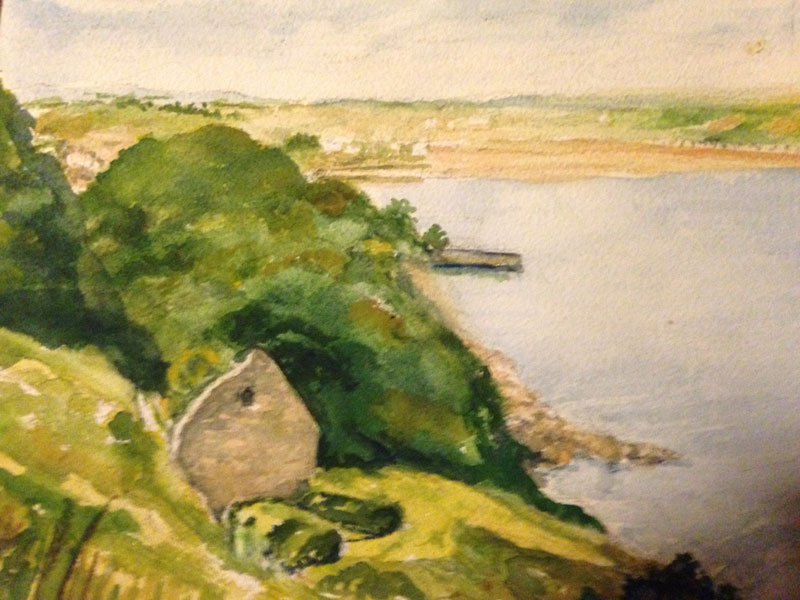 Visitors to Saint Declan’s Well will know that they are walking in a place that a Saint spent time in.

But few visitors will know Hugh Byrne. A private soldier in the Donegal militia that dedicated his the end of his life to tending to the Well. He is also said to have been buried next to Declan’s grave.

Some people just make a difference.

And, often they may not even know that their efforts will be remembered after they are gone.

As you walk around the Well next, spare a thought for Hugh.

For the history enthusiasts, we continue this story with a wonderful article from THE DUBLIN PENNY JOURNAL CONDUCTED BY P. DIXON HARDY, M.R.I.A. Vol. III – OCTOBER 4, in 1834. No. 118.

“The village of Ardmore is situated on the coast of the county of Waterford, about four miles from Youghal, and is remarkable for one of the most perfect round towers to be found in Ireland, the origin of which is attributed to St. Declan, who is said to have been the friend and companion of St. Patrick, by whom he was made Bishop of Ardmore, where he founded an abbey about the year 402, and where his memory is still held in great veneration.

The tower is about ninety feet high, and fifteen feet in diameter at the ba.se; and the door-way is sixteen feet from the ground. Its formation is different from most others, being divided into four stones or compartments, each marked by a projecting course of solid masonry, carried round the building, and each story has a window or loop-hole: the whole structure is well built, and bids fair to withstand the ravages of time for centuries to come. It is a prominent feature in the landscape, being visible for many miles around, and serves occasionally as a landmark for vessels at sea. 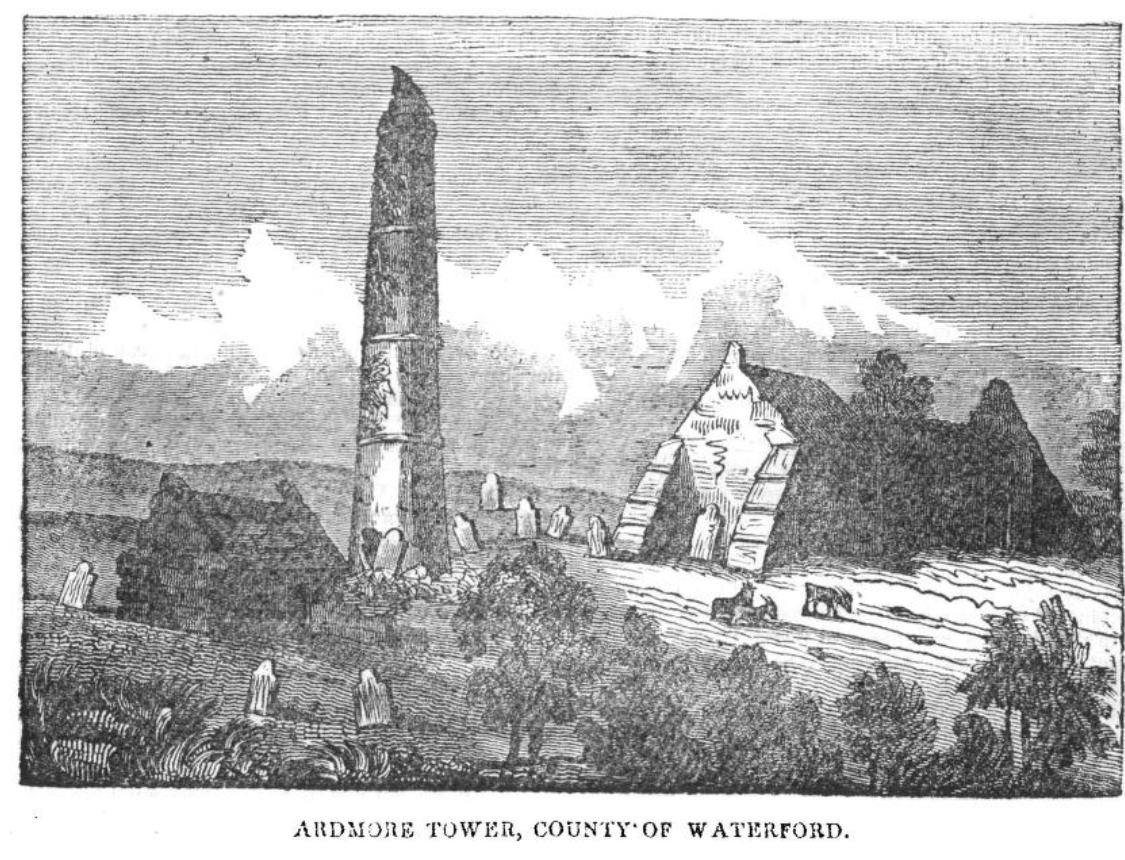 St. Declan was descended from the family of the Desii, whose territories extended over the southern and western parts of the county of Waterford. He traveled to Italy when young — resided in Rome for several years, and being ordained by the Pope, he returned home; was consecrated Bishop of Ardmore, and survived to a great age; for his immediate successor, St. Ultan, lived until the year 550. He was buried in the churchyard here, in the dormitory, which goes by his name, and which is visited by vast numbers on the 24th of July, on which day his festival is held. Great virtues are attributed to the clay which is supposed to cover his remains, and which is taken away in small quantities from time to time, has gradually excavated the surface to a depth of several feet below the adjacent soil. This dormitory was repaired and roofed, at the expense of Bishop Mills, about 100 hundred and twenty years ago.

There is also a well bearing the name of the saint, and a stone on the sea-shore, which tradition reports to have floated over from Rome with the bells of the cathedral, and which is connected with many superstitious ceremonies.

The present church is but small, being only a part of the chancel of the old one, a portion of the walls of which still remain, covered with ivy; and one of the windows is adorned with curious carvings in freestone, representing, the twelve apostles, and various scenes in scripture history. (R. F.)

We are informed by our correspondent, E. H., that there are two transverse pieces of wood or metal at the top of the interior of the tower, to which he supposes the bell was attached, which is said to have been so deep and powerful in tone as to be heard at Glown Moore or Big Glen, a distance of eight miles. The top of the tower, which suddenly diminishes to a conical point, appears loose, and threatens a momentary fall; but, strange to say, it has withstood the fierce blast of about thirty winters in the same position, before which time it was erect, and surmounted with a cross.

A little further, on the edge of some shelving rocks, which immediately overhang the bay of Ardmore, is the ruin of an old place of worship, called Thoumpel a Deshert or the old “Temple of Dissart:” at one end of which stood a high gable, ornamented with a well-cut Gothic window, which was demolished by a sudden gust of wind seven or eight years since, and has now nothing more to boast of than the “holy well” in one of the walls, which owes its present neat and enticing appearance to an individual named Hugh Byrne, a private soldier in the Donegal militia, who, after the Irish rebellion of 1798, came here, and passed the remainder of his life in this solitary abode, and was buried beside St. Declan. There is a square doorway on one side of this old building, with an inverted key-stone in the arch, which has been a source of much inquiry and difference of opinion amongst the lower class of the adjacent mechanics, but which may be easily accounted for on inspection. Adjoining this are some silver mine-holes, which at present afford nothing more than pure water.”