Bottom Line: Bloody Heads From Fighting Were Not Uncommon In Ardmore

Ardmore is just waiting to be explored.

It provides a remote getaway. A base for action-packed adventures on the water. And, every other sort of escape that you could desire in between.

And, like any visitor, you may choose to keep a diary of your experience.

But, we are confident that you’ll never experience what one visitor did in 1911.

Enjoy this melancholy scene from the notebook of a gentleman of high attainments and undoubted  veracity.

“22nd July. Arrived this evening at Ardmore, preparations already making for the due  celebration of the Patron’s day; visited the dormitory of St.  Declan; an old meagre figure had possession of the grave, in  which she ate, drank, and slept, that none other might claim a right to it; one half of her only appeared above ground; the last  supply of earth for the approaching demand had just been put in; she recommended us strongly to take a portion in the name of  God and the blessed Saint (on pronouncing the latter name she  with due reverence dropped a low curtsey), as a preventive against  fire, drowning, etc, etc., if eaten with due faith.

23rd. Barrels  of porter and whiskey arriving by sea and land in numbers, already three hundred have landed, and every avenue teems with  figures moving along to pay their devotions. 10 o’clock.

Commenced my rounds, though the 24th is the Patron’s day; walked  down to the seashore, where a few yards below high water mark  is the far-famed stone that in the fourth century (before the arrival of Saint Patrick) came floating over from Rome at the  prayer of St. Declan, with a bell upon it for the edification of  the Irish. On our way, we passed through assembled multitudes pitching tents, fastening up carts and cars as dwellings, arranging their goods, and now and then fighting, without which Paddy cannot live long in good humour; passed on, here the first scene  began, and I counted 154 persons kneeling round the stone, fresh  comers every moment succeeding those who had told their beads  and said their prayers. I watched their motions as they approached the stone; they took off their hats, then lowly bowed  their heads, and dropped their knees on the pointed rocks; here they repeated several prayers, telling over their beads; then solemnly drew near and reverentially kissed the unformed mass several times, then bumped their backs against it three times,  drew back in awe, dropped again on their knees repeating more  prayers, and silently retired; children in arms were pressed down  till their little mouths touched the holy stone. 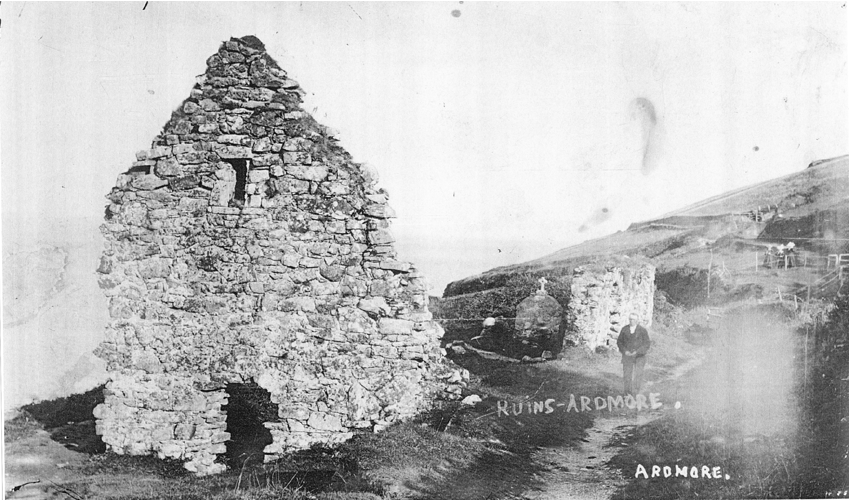 The crowd then  formed a long line winding up the narrow path that leads along the mountain’s brow to St. Declan’s chapel; here, too, I went:  the scenery was beautiful as we looked over the precipitous cliffs  across the bay of Ardmore. On the brink stand the remnants of  a chapel, said to be the first built in Ireland. On entering the gateway, on your right hand, is the well St. Declan blessed; a narrow doorway leads to it, a formidable figure had possession  of it, and dealt out in pint mugs to those who paid; some drank it, some poured it on their limbs, their head, their backs, in the  most devout manner; some claimed a second portion to bottle  and carry home to sick relatives, or to preserve their houses from fire; they then knelt down to the well, and said their prayers;  after which, devoutly turning round, they repeated their prayers  to a little mount, under which had been the east window, crept on their knees to it, kissed it, said more prayers, crossed themselves, and walked on; here the crowd of mendicants was great, and the miserable objects of deformity more lamentable than I  had ever seen, and too disgusting to detail; the crowd now wound  higher up the hill, inclined back again, and proceeded to the  grave, here they knelt again in the most abject posture, saying  prayers, and waiting for their turn to be admitted into the little dormitory, where the old hag distributed the earth, and gave  lectures on its efficacy, as preventing drowning, burning, etc.

A few yards brought us to the far-famed round tower, the most perfect in Ireland; here again, the devout pilgrims repeated prayers  and told their beads, and knelt with the utmost humility, kissed  the tower, broke off pieces, which they carried away; then the  whole crowd filed off to the chapel, which was open to receive them,  and mass was celebrated in all due form; here the devotions of  the day ended; at twenty different periods I counted the people  as they passed; they averaged fifty-five a minute, which gives a  total of 12 or 15,000 persons; these numbers accorded with other calculations.

The tents, sixty-four in number, are now complete, eating, drinking, dancing, occupy the multitude. One figure is walking about with a boiled leg of mutton and salt in one hand,  a big knife in the other, vociferating ‘a cut for a penny! ‘a cut  for a penny!’ here cheese and fish are selling; some tents contain  gaming-tables, but the great body of persons are going round as on yesterday; they are more numerous, a few force themselves  under the stone, praying as they crawl with difficulty.

Seven  o’clock: All now appears confusion, every man is drunk, and every woman is holding a man back from the deadly combat; bloody knees from devotion and bloody heads from fighting are not uncommon.

Eight o’clock: Three cabins are now blazing furiously, not a vestige can be saved; such a scene fighting, pulling; drinking whiskey, holy-water; crying, cursing I have never seen.

Nine o’clock: Fire nearly subdued for want of fuel; here comes  the old Jezebel from the grave, covered with earth, half-naked,  and yellow as the clay of which she bears a portion, and is strewing it in places the fire cannot reach, to show its virtue in destroying that devouring element.

25th Tents nearly struck; a few of the most devout remain to complete their devotions.

Seven o’clock All is still again, and Ardmore is again a mere secluded village.

Taken From Ireland: its scenery, character, and history, by Mr. & Mrs. S. C. Hall, illustrated from paintings by F. S. Walker and photographs (1911).