Soak up the unique atmosphere of Ardmore, and hundreds of years of history light up some of the most iconic sights in the country.

In Ardmore, we want to offer you the most exciting and engaging ways to explore Ardmore’s past. Whether you find inspiration in the evocative settings, little-known details, or colorful characters in our history, staying in Ardmore will make for a unique experience.

As you walk around the quiet streets, you might consider that you too are walking in the footsteps of a Saint.

Here is an interesting story that tells how St Declan arrived in Ardmore. It was initially written by Rev. P Power and presented in The Kilkenny and the South East Archeological Society in 1898 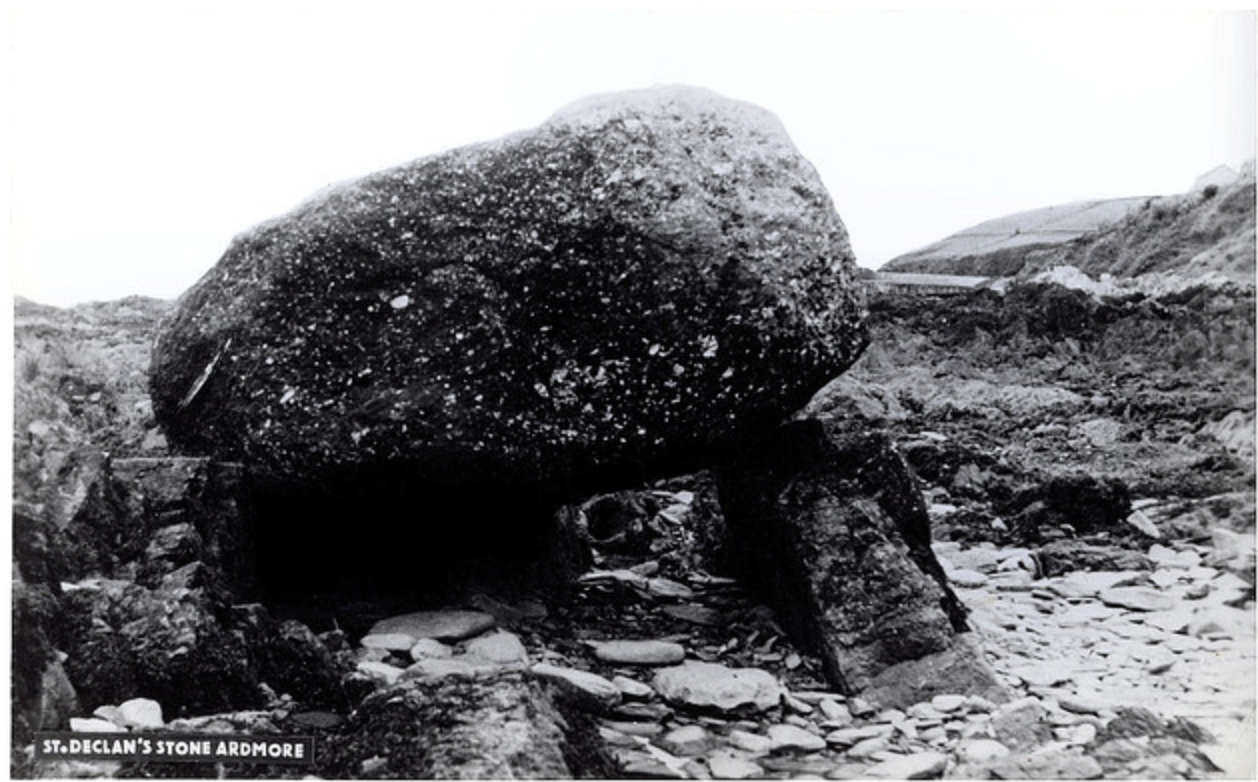 “Our visit to Ardmore would be incomplete without a sight of the famous stone of St. Declan. This is a commonplace looking boulder of conglomerate resting on the beach and supported by two slightly jutting projections of rock.

The 12th Century “Life” thus chronicles the saint’s connection with the stone. As St. Declan was on his way homewards from Rome he paid a somewhat lengthened visit to his friend, St. David, in the latter’s city of Menavia. When the visitor was finally about to embark for Ireland, one of his muintir, or household, Luanus by name, hackled the saint’s bell to a brother monk with the intention that the latter should see it safely onboard the ship. In the confusion and hurry of embarkation, the monk forgot the bell, which for safety he had temporarily placed on a rock by the shore. It was not till the travelers had half completed their voyage across the Irish Sea that the bell was remembered. Declan, when the loss was made known to him, was much grieved and troubled thereat. He had recourse to prayer, however, and soon the stone, bearing the bell, was seen floating towards them on the waves. Thereupon Declan ordered his companions to steer their boat in the wake of the floating stone, for wherever, he declared, it should come to land, there would he build his city, and there should the place of his resurrection be. The stone with its burden proceeded on its wondrous way till it reached an island, on to the beach of which it floated. Thither followed the man of God with his companions.

The island of the legend is the present Ardmore, then called

(” High Sheep Island “), because the sheep of the chieftain’s wife were depastured there. In subsequent times the island was joined to the mainland by reclamation or draining of the channel which had separated them.”

We also include a short extract from ‘an improved topographical and historical Hibernian gazetteer; describing the various boroughs, baronies, buildings, &c., scientifically arranged, with an appendix of ancient names. To which is added, an introduction to the ancient and modern history of Ireland. By the Rev. G. Hansbrow (1835)’

Ardmore, a parish, containing a considerable tract, in the  county Waterford, province of Munster; the name signifies a  great height or eminence; it was anciently an episcopal see, erected by St. Declan, the first bishop of it, in the infancy of the  Irish church, and confirmed in the Synod of Cashel, held in  448. St. Declan was born in this community, and was of the family  of the Desii. There are at present the remains of two ancient  churches at Ardmore, one situated at the edge of a cliff, near  the sea, which is quite in ruins, near which, on the strand, they  shew you St. Declan’s stone, which they say swam miraculously  from Rome, conveying upon it St. Declan’s bell and vestments.

The other church stands about a mile N. W. of the former, and by its appearance seems very ancient.

Tags: How Ardmore Waterford Was Named