Everything You Have To Know About The Amazing Marechal de Noailles

On 12th December 1912, the Marechal de Noailles of Nantes left Glasgow for New Caledonia, a French Penal Island in the South Pacific.  She carried a cargo of coal, coke, limestone, and railway materials.  There was a crew of twenty besides the Captain and First and Second Mates.  The beginning of the voyage was eventful with seven days being spent at Greenock waiting for an improvement in the weather; a further seventeen days off Aran Island, Scotland; then venturing down the Irish Sea but about sixty-five miles north of Tuskar having to retrace the voyage, this time to Belfast Lough.  At last, they really got going and were a few miles from Ballycotton, when the wind strengthened.  They turned about; the Captain fired distress signals; eventually, the ship was blown ashore three hundred yards west of Mine Head. 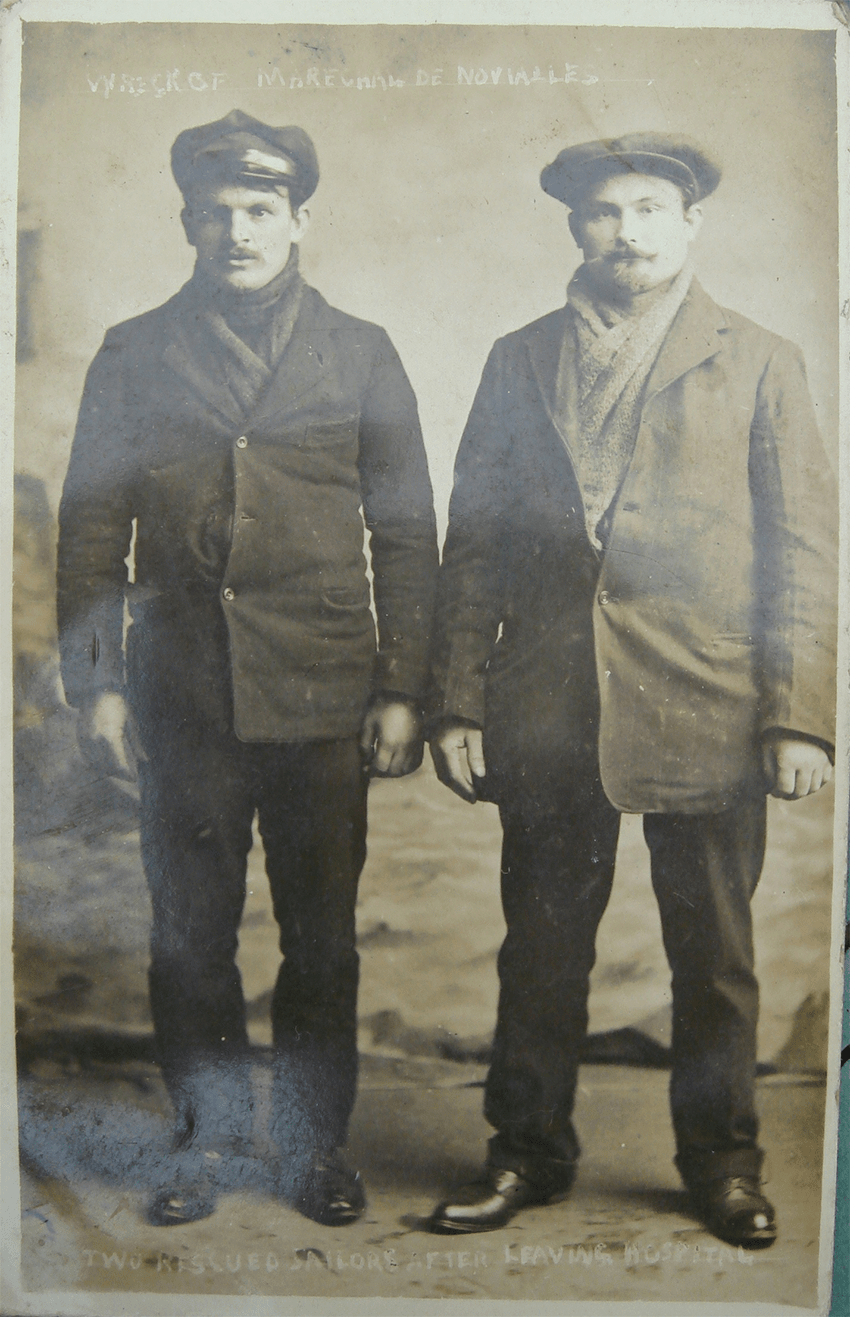 As the roads were too bad for the rocket wagon to travel, the crew carried the apparatus fourteen miles on foot to the wreck and arrived about 2 am.  The apparatus was assembled; the first rocket passed over the vessel, but the crew did not know how to deal with it. 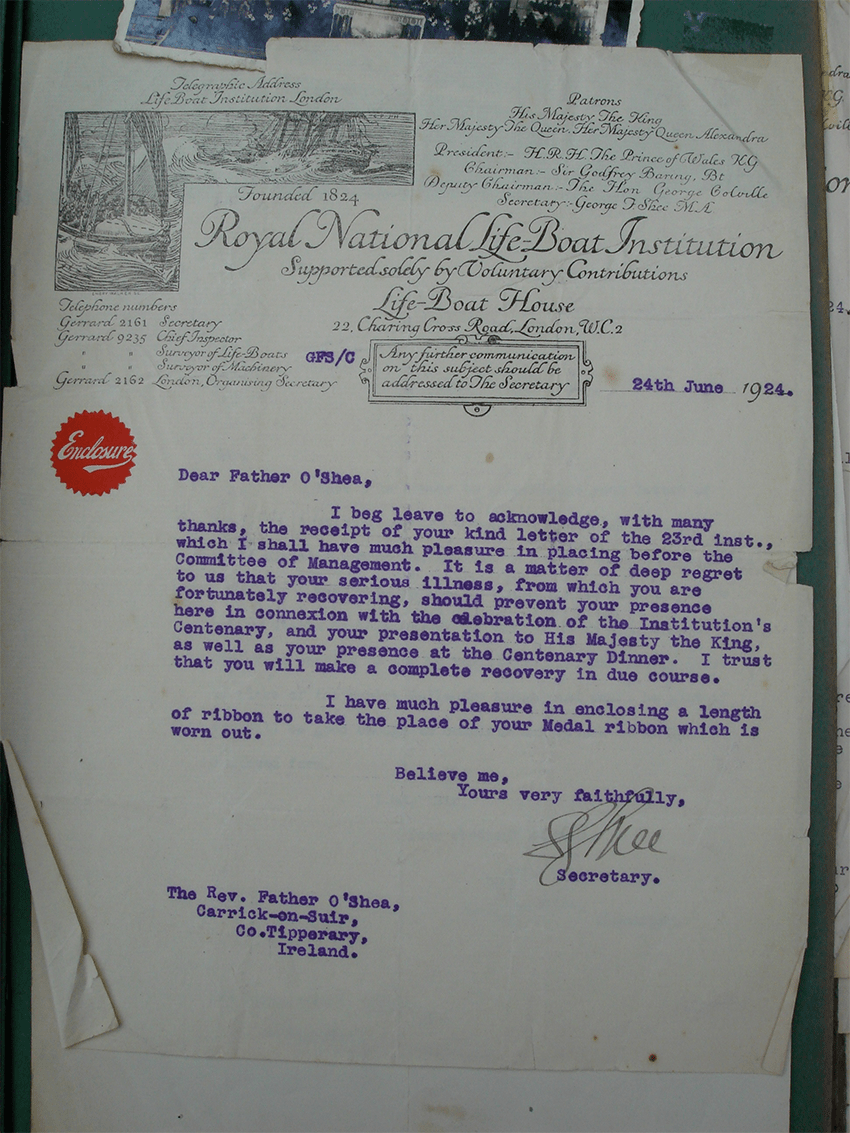 Meanwhile, one sailor had been washed overboard and J Quain encountered him at the bottom of the cliff and explained the workings of the rocket apparatus, by sign language.  With the aid of a megaphone, he instructed the rest of the crew still on the ship how to work the Breeches Buoy, and all the men came ashore.

Four had been injured during the night by flying spars and were unconscious and anointed by Fr. O’Shea.  All were eventually taken to Dungarvan.  Some months later, Fr. O’Shea had a most appreciative letter from Captain Huet, Morlaix.

No doubt, it was an unforgettable experience for the Ardmore men, tramping for hours in the dead of night with their apparatus which looked as if it wasn’t going to have the desired effect; then the joyful break-through the language barrier and being surrounded by a group of men “quacking like ducks” as one of them put it.  So it is not surprising that the name Marechal de Noailles is remembered years afterward in Ardmore.  (Most of this account is taken from the article by Donal Walsh in Decies. September 1982.) 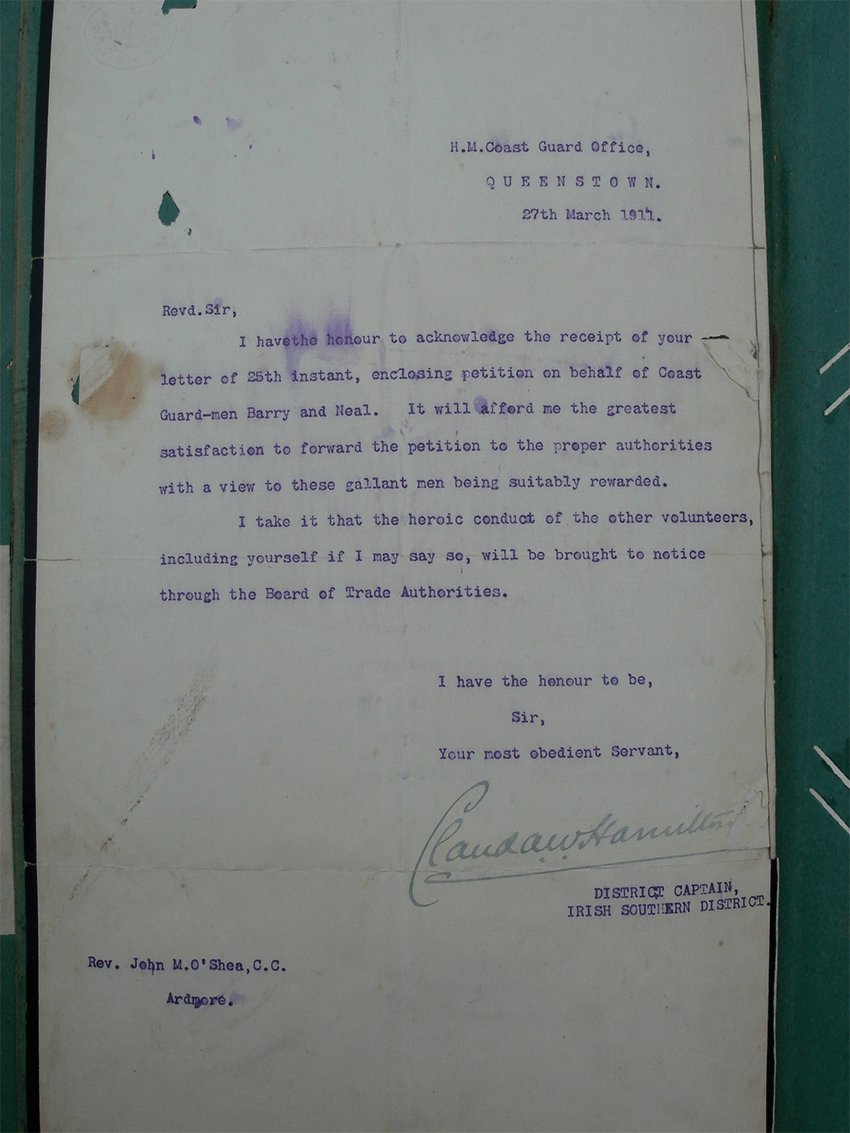